She also tied a note to one of his clubs that said, “Good luck, honey! I hope you get a hole in one!” But we don’t find out about that until years later, after the divorce. 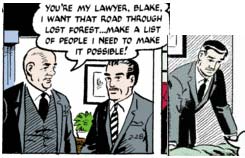 On the left we have Blake, the Lex Luthor of eminent domain’s lawyer (we this know because L.L.o.E.D. says “You’re my lawyer, Blake”). On the right, we have Scott, erstwhile husband of Lynn, former co-conspirator to commit murder, and, presumably, current CEO of BoydCo. Put them together, and we have proof that the entire universe of Mark Trail is populated by about eight people.