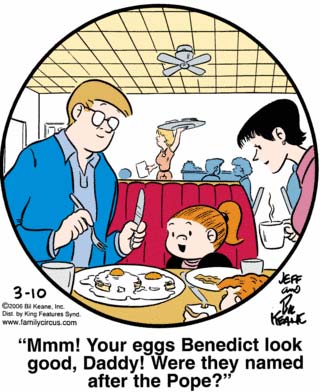 Actually, Dolly, it’s a little known fact that the Pope is named after the eggs. Yes, in an attempt to shore up flagging membership numbers, all future pontiffs will be named after breakfast foods that are determined via focus groups to be widely perceived as delicious. Look for future conclaves to elect Pope Oatmeal, Pope Shredded Wheat, Pope Scrapple, and, in a partnership that will see the CEO of Denny’s appointed to the College of Cardinals, Pope Moons Over My Hammy®.

OK, seriously: B-16 (as I have been trying to get people to call him, to little avail) has been pope for less than a year, and I think this is the second or third “benedict” pun the Family Circus has done. Are the Keanes on the payroll of Opus Dei all of the sudden? Because I think that they could be spending their money more wisely.