Yeah, so this makes all kinds of no sense. I suppose it’s supposed to be a play on the metaphorical and literal meanings of the phrase “horn blowing,” but … but … but. I want to believe that this isn’t just totally insane, but I just can’t figure out how. Help. Please. 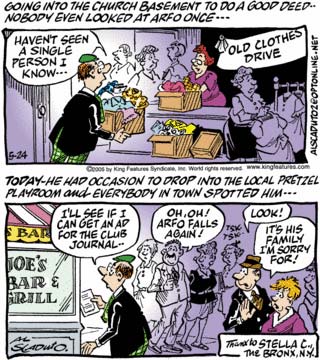 Fun new phrase to try to deploy in everyday life: “Pretzel Playroom.” Fun new name to suggest to expectant parents as a substitute for “Taylor” or “Devlin”: “Arfo.”

Question: Was the dashing police officer sexually attracted to Miss Buxley … or to her sexy, sexy car? Also, note that said sexy, sexy car has some pimpin’ rims, to the extent that the universe of Beetle Bailey can accommodate the concept of “pimpin’ rims.” Also also, I know that it’s probably a goof-up among the coloring monkeys, but I’d like to think that Miss Blips’ hair is suddenly blonde because she’s desperate to find out if blondes really do have more fun. (Did you know that her name was Miss Blips? I had to look it up. Yes, it’s a reference to her tiny breasts — they’re just “blips on the radar screen” compared to Miss Buxley’s — which no doubt means that the dye job won’t help.)

In cockroach news, after a bout of judicious insecticide spraying and a thorough mopping of the cat floor area to eliminate scent trails, I awoke to a roach-free cat dish this morning. Hopefully they aren’t marshaling their forces for some sort of counterattack.