Remember a few days ago, when I suggested this Dick Tracy plot would end with its bumbling villains drowning in a sewer? Well, in fact, one of them fell down a ladder in a sewer and terribly injured himself and was abandoned by his compatriot, who then inexplicably drove their getaway van up onto a sidewalk, causing the (unlocked?) rear doors to pop open and the valuable meteorite inside to plop unceremoniously out onto the street, which I have to admit is much, much funnier.

American Pie, the teen sex comedy that broke all kinds of taboos by featuring a teen boy fucking a pie, is now more than 20 years old, so it’s no surprise that it’s now getting a gender-swapped reboot, in which it’s now an adult woman who fucks a pie, but also she and the pie enter into a long-term committed relationship, and then she brings the pie home to her family for Thanksgiving, and her family eats the pie, which you have to admit is a lot darker. 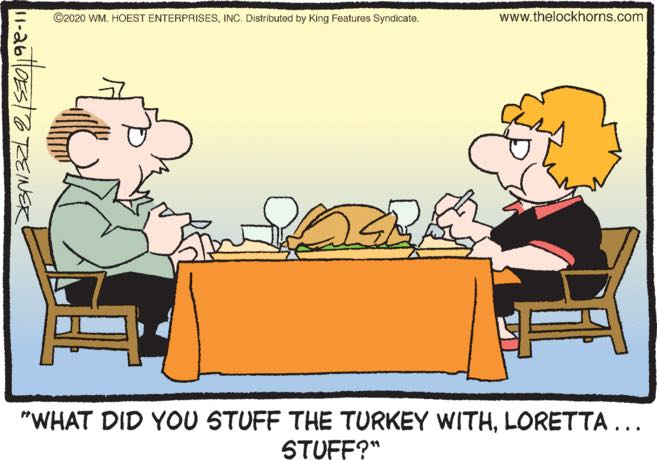 Many Americans are pretty sad this year because they’re spending Thanksgiving with just their immediate family or perhaps alone. But if you’re in that position, console yourself in the knowledge that it really is just for this year, whereas Leroy and Loretta have Thanksgiving together alone with the person they hate the most (for Leroy that’s Loretta, and vice versa) every year, in this featureless void, for the rest of eternity. 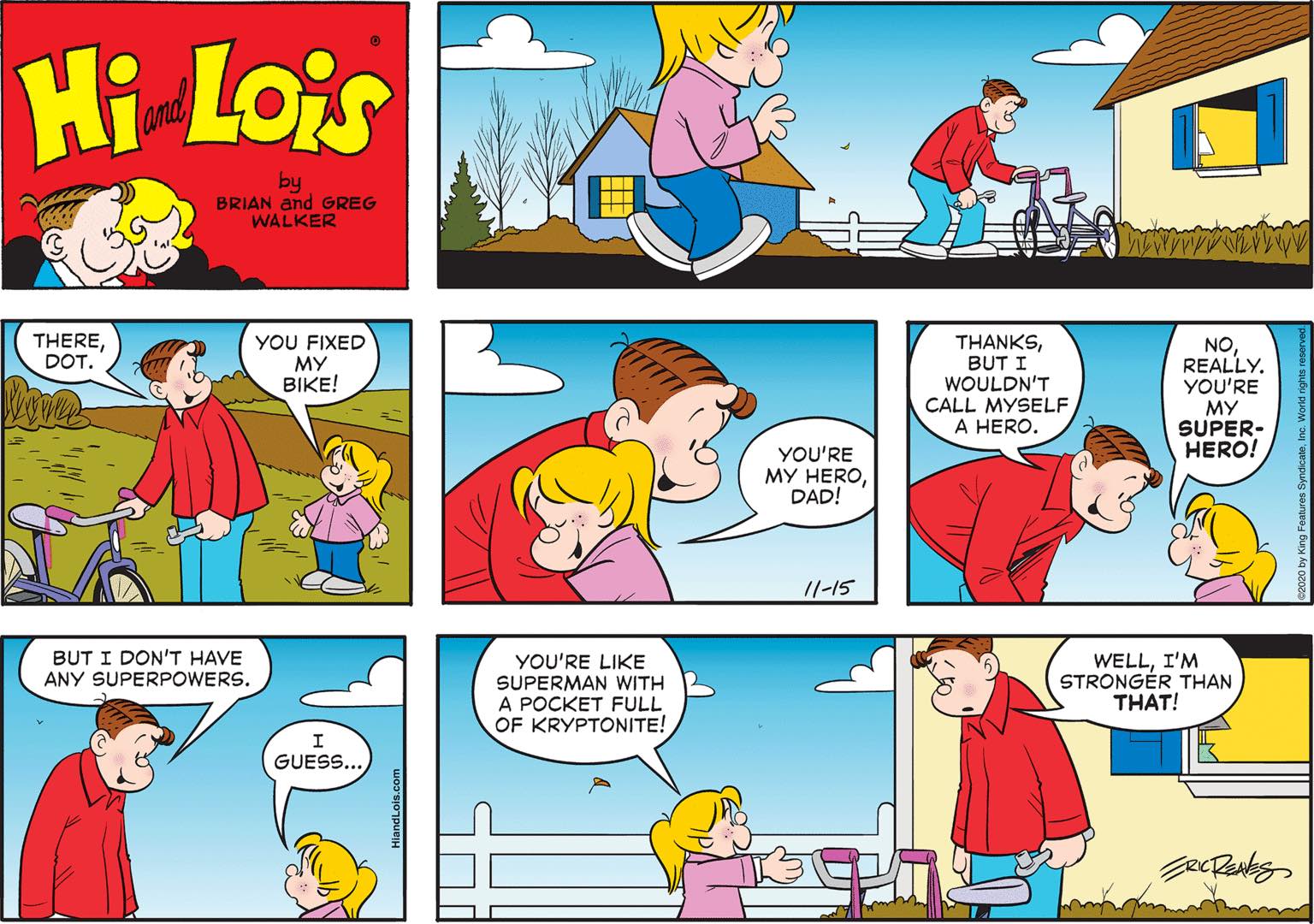 From the fall of 1992 to the spring of 1993, I was a freshman at Cornell University, and at Cornell — and, I assume, at many other universities, although I can only speak to my experience — Spin Doctors’ debut album, Pocket Full of Kryptonite, was absolutely inescapable, and after a few weeks I definitely wanted to escape it, though I admit that during the brief window before I came to loathe the band I did put “Two Princes” on a mix tape for a young lady I was trying, without success, to woo. Anyway, I had mostly managed to purge the music from my head until someone over at Waker-Browne Amalgamated Humor Industries LLC decided to slip the phrase “pocket full of Kryptonite” into today’s strip, which made me wonder if the album title was maybe a reference to something else, but nope, it’s just a lyric from the album, so there you go: Spin Doctors content in today’s Hi and Lois. While on this journey of discovery, I did learn that that Spin Doctors’ Wikipedia article has one of my very favorite Wikipedia Things, a bar chart showing the comings and goings of various musicians in the band’s lineup over the years, from which I learned that John Popper, later of Blues Traveler, another band unavoidable in Cornell dorms in the early-to-mid ’90s, was briefly in Spin Doctors, which I found noteworthy enough to mention to my wife. Her responses were “Am I supposed to care about this” and “I cannot think of two bands I care less about,” which, I guess, is ultimately why I have a blog, because I have to tell someone this stuff. Anyway, thanks a lot for making me think about this, Hi and Lois. Thanks a lot.

Honestly, I’m not even sure what to say about this except that I’m kind of in awe of the series of free associations that brought this … allegory? metaphor? fever dream? … into existence. I assume that after utterly defeating the dinosaurs on the court, the asteroids high fived one another, leapt far up into space, and then plummeted back down to earth, obliterating both their vanquished foes and themselves in an apocalyptic blast.

Ha ha, Parson, that so-called “currency” doesn’t do you much good in a community that mostly exists as a pre-monetary economy in which social ties mediate almost all economic exchange, does it?

Look, I know it’s “spooky season” or whatever but I honestly did not want to spend a lot of my day thinking about how ghosts interact with physical matter, ok? Like, we all know they can pass through solid walls at will, but also apparently lounge on furniture if they want. But what’s their relationship with gasses like? Do they have the ability to detect vibrations in the air and process them as sound, the way we do? When they “talk” to one another, are they doing it via audible noise or direct mind-to-mind (soul-to-soul?) communication, and thus maybe the “ears” in this statement are metaphorical, or a memory of what it was like to have a physical body, who knows how many centuries ago? Anyway, I’m not sure if I’d be obsessing about this less if any of these ghosts had visible earholes or anything, but I would’ve liked to have found out.

There’s a been a lot of hilarity in this weird Dick Tracy vampire storyline, but the fact that Professor Stokes is swinging off the roof on a JAZZ FEST banner is the absolute funniest thing we’ve seen in this strip in a long time. I can’t quite explain why I’m sure a biology professor who’s into extremely chintzy mechanically-assisted vampirism would also be very into jazz, but I’m very sure that he would be. Professor Stokes is probably sad that his artificial bat wing apparatus is still in the prototype stage at the moment, but if he can’t fly away, at least he can make his escape with an assist from his beloved jazz fest.

God, I love that Dustin’s dad is absolutely seething in the second panel. He went through all this trouble of buying a big suburban house, just like society says he was supposed to, and now he finds out he has to maintain it, just like he has to maintain his failing body? This is bullshit. Bullshit.