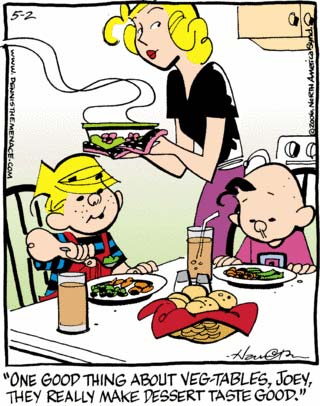 Hello and welcome to our latest quasi-recurring Comics Curmudgeon feature, from the geniuses who brought you What They Say And What They Mean — it’s What’s The Deal? Basically, this feature happens when nothing really excites me in the comics and so I just pick out one little detail and nitpick about it. (“Which is different from usual how?” you say. Ha ha ha!) Our first installment concerns Dennis the Menace’s little friend Joey. Joey appears to have exactly zero hair on his head, except for a longish lock right between his eyebrows. This is pretty punk rock, except that, while we don’t really know that much about Joey, we know that he is very, very much not punk rock.

(Other What’s The deal? candidates in this panel: the hyphen in “veg-tables,” and Joey’s brown yet still translucent drink, which looks a little too much like this. But I’ve always wondered about his hair.)