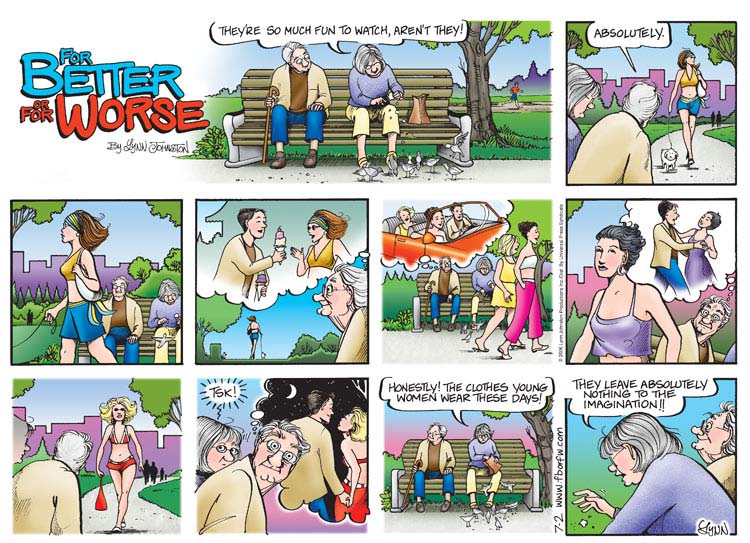 I admit it: In addition to being a judgmental bastard, I’m a capricious bastard. How else can you explain the fact that I found Grandpa Foob’s last sexual fantasy sequence horrifying and distasteful, while I was mildly charmed by this one? Maybe it’s because instead of hoping to be rubbed down by nubile slave girls, he’s imagining relatively innocent pursuits, like dancing at arm’s length, holding hands in the general vicinity of pert young rear ends, or sharing incredibly phallic ice cream cones. Maybe I’m impressed that he’s daring to dream about a blonde-brunette three-way, or at least about driving to one. Maybe it’s because the strip dramatically illustrates the fact that, no matter what our age, we’re always young and virile in our own minds, our chins firm and manly, with only a slight cleft pointing the way to their scrotum-like future.

Meanwhile, in Rex Morgan, M.D., Rex is wearing a kind of gay robe. 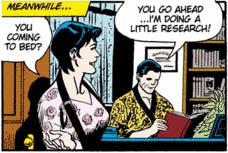 Going over my old posts, I’ve noticed a trend with me and Rex Morgan: I get all excited about every new storyline and inevitably have fun with it for the first few weeks; then suddenly the air goes out if it and I lose
interest. The last few weeks in this strip have involved a punk-haired girl killing Harry and taking over the blackmailing biz and … a partial fingerprint … and … something about arthritis … damn, I can’t even work up the energy to write a summary. But I offer Rex in his classy robe here as a reminder of happier times.

(Speaking of robes, what the hell is June wearing? At first I thought she had one of those little trays that hook over your neck, like an old-timey cigarette girl, which she was pretending to be in a desperate and doomed attempt to get Rex’s attention. But I suspect she’s just wearing a robe festooned with the exact same cheesy pattern as the top underneath it. More troubling is the hand at the bottom of the frame, which appears to be protruding from her torso.)