Never has the flabby make-it-up-as-you-go-along nature of the Foobian plot been on display as nakedly as it is here. I mean: How far away is Liz’s apartment from her parents’ house that she would considering moving back there to shave a little off her commute? And she’s been back down south for, what, three months now? Don’t they have leases in Canada, or are Pattersons just allowed to break them with impunity? And doesn’t Ellie have any say over whether her totally adult and self-sufficient daughter decides to up and move back in, or is she just going to go on with the passive “It’ll happen if it happens” attitude? These are questions that I want answered. In return, I’ll answer April’s question about why Liz wouldn’t want to move back home: it’s because she’s, like, 26, and living at home when you’re 26 and have a job is for looooooosers. 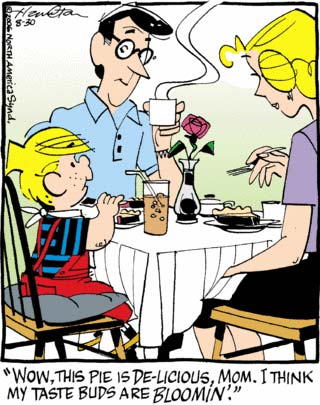 Speaking of losers, Dennis is continuing his trend of eschewing menacing, preferring instead to hone his floral-themed dinner-table bon mots. It actually took me about 45 seconds to grasp the “bud”-“blossom” wordplay going on here, and I finally only got the joke because of the presence of the rose on the dinner table, which I assume was intentional. Note to cartoonists: If you need to put in a visual aid to forward the cause of a pun in your comic, your pun needs work.

Apparently it’s terrified prey week in Slylock Fox. As if the terrified beaver wasn’t traumatizing enough, check out the discarded ribcage, presumably of one of his family members, next to the crocodile on dry land. Today’s scene of the savagery of nature provides a backdrop for a true/false quiz. “True or False: Sometimes things that are cute and basically good die in agony for so that something more powerful and vicious can survive. (Answer: So very true!)”