I have nothing particularly hateful to say about today’s Pluggers, which is a good thing, because “Jason Rhea” of “Littleton, CO” is none other than Comics Curmudgeon faithful reader and occasional commentor Racing Js! So, congrats, Jason, on being the first Curmdgeoner Cardinal (but not, we hope the last) to get your home-spun wisdom enacted by freakish beast-persons.

Meanwhile, the comics’ other great reader-entry feature is proving itself to be a tougher nut to crack. 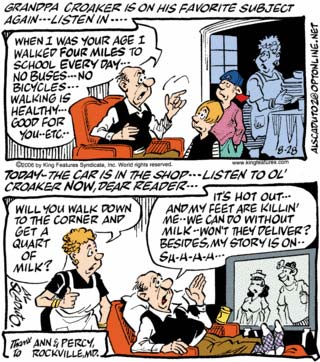 Could this be the most cold-hearted TDIET yet? Allow me to paraphrase: “When he was healthy and in the prime of his life, Grandpa Croaker enjoyed his body’s youthful strength, and thought nothing of walking from place to place. But now that the ravages of age have broken down his joints and sucked the energy from his soul — howzat? — he’d prefer not to walk if he doesn’t have to.” The name “Croaker” is just piling on, letting us know that his inability to walk to the corner is a herald of his swiftly impending death. Oh yeah!

Last summer, square-headed superteen Von Hanley managed to defeat a stalker with just a bunch of flashlights and his quick wits; this year, he, Marty, and Mandy, presumably after repeated viewing of The Sting, are apparently conspiring together to grift the grifter, and prove that two wrongs really do make a right. Since golf isn’t Von’s forte, and our three wannabe hustlers probably have about 130 IQ points between them, I have to assume that once Mandy arrives, she and Marty are just going to hold Ben Franklin down while Von administers a savage beatdown with his $4 Salvation Army putter.

God damn, is Liz going to have all of her problems solved by women leaving their husbands?

By the way, Liz is way, way too excited about the opportunity to teach little suburban children. Yeah, it’s her life dream and blah blah blah, but you can’t tell me that any job short of, oh, I don’t know, the Governor General’s Official Fluffy Kitten Petter And Delicious Chocolate Eater would generate the kind of deranged enthusiasm portrayed here. No, her over-the-top reaction to a mere interview (which magically morphs into a job offer the moment she hangs up the phone), combined with her freakishly dilated pupils, the slovenly nature of her hovel, and her inability to focus on one thing long enough to pour her mac and cheese out of the pot and into a bowl can indicate only one thing about Liz: she’s all methed up. I for one look forward to the heartbreaking lessons about drug abuse that we’re about to learn.