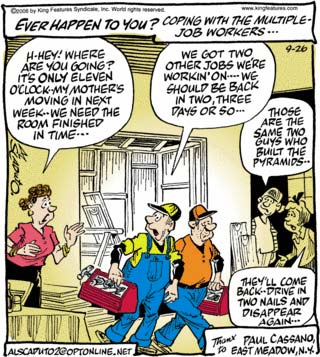 The main gripe in today’s TDIET is ludicrously pointless (contractors sometimes overextend themselves and take longer to finish things than you think they will oh no oh no whatever shall we do) but I’m intrigued by one of the comments from the peanut gallery at the right of the frame: “Those are the same two guys who built the pyramids.” What on earth is this supposed to mean? That they’re immortal and unimaginably old? That they’re sinister Egyptians? That the pyramids, like this Long Island in-law addition, were vast projects that took years to complete and were intended to house mummified corpses?

I was going to rely on my ancient history master’s degree and, more importantly, my repeated viewings of the Ten Commandments to work out a riff about how the pyramids were actually built by tens of thousands of slaves who could just be whipped into submission if they tried anything funny like this, but I decided to quickly check the relevant Wikipedia article, which, since it’s written by thousands of know-it-alls with lots of free time, cannot be wrong, and I found out the following:

Two major theories surround the construction of the pyramids of Egypt. The first theory, suggested by the Greeks, posits that slaves were forced to work until the pyramid was done. A more widely accepted theory in the modern era, however, suggests that the Great Pyramids of Egypt were built by hundreds of skilled workers who camped near the pyramids and worked for a salary or as a form of paying taxes until the construction was completed.

Soooo, um, no whippings, I guess. Still and all, I imagine that none of these skilled workers ever lipped off to pharaoh about how the Tyrians wanted some Ba’al temples built, and the Nubians have this irrigation system they need overhauled, so they’d be back in a few days. But I don’t think we should lose sight of the larger picture here, which is: the little kid is making cracks about the pyramids, what the hell.

I continue to enjoy new artist Eduardo Barreto’s work on Judge Parker, but I also wish he’d pick a lettering style and stick with it. This one is an improvement over the previous font, though the fact that it seems to all be in italics makes it looks like everybody is shouting all the time. Which, who knows, maybe they are. All the dialogue seems to end in exclamation points, anyway.

Katherine Harris Parker may have gathered 1,500 signatures, but she managed to obliquelly bring up once more what appears to be Randy Parker’s Achilles’ heel in the bizarro-world that is Judge Parker: his unmarried status. At least Reggie Black has a wife, you … you … not-the-marrying-kind-if-you-know-what-I-mean-nudge-nudge-wink-wink! In real life, of course Randy’s family situation and sexuality would be irrelevant in his bid for the bench, but he would be unable to project the gravitas needed to be judge because everyone would be snickering about his being named “Randy.”

For the record, the most recent changes to the MPAA rating system were the introduction of the PG-13 rating in 1984 and the changing of the X rating to NC-17 in 1990. OH MY GOD STOP THE WORLD I WANT TO GET OFF!