I’m sure there’s going to be plenty of time to discuss at great length Liz’s sanctimoniousness (faithful commentor fillmoreeast memorably referred to her as the “White Guilt Fairy”). For now, I’d just to point out that she’s awfully smug for someone who appears to have fallen under the spell of technology-assisted learning pretty much instantly. “All right kids, I’m going ask you a single question, which won’t require any kind of creative or analytical thinking on your part, before I turn on the TV. Now watch this damn tape about … I dunno … the environment or some crap. And watch it quietly. Just because I have my head down on my desk doesn’t mean I can’t hear you.”

By the way, Liz, Canada’s longest river is the Mackenzie, which for its entire length flows through … the Northwest Territories. Thus, it crosses no provinces at all. I learned this the old-fashioned way: on the Internet.

Oh my God, Raju, don’t wait for the clothes — you’re clearly irresistible to somebody. Look at the way she’s staring soulfully into your eyes! Kiss her, you fool, before the moment’s gone!

I’ve always been too distracted by the fright-wig craziness going on at the top of Abbey’s head to really notice the long, luxurious locks cascading down the back. She may be the wealthiest woman in America sporting a Manic Panic she-mullet.

Honestly, we’ve learned this already, But Molly the bear really needs to learn to express affection in some way other than french kissing. Here, she runs afoul of the moose-kangaroo hybrids that have escaped their secret government breeding compounds and are ranging free in Lost Forest. 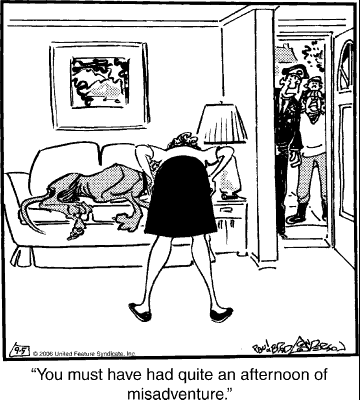 There is entirely too much ass in today’s Marmaduke.