It was particularly hard to choose one Comment Of The Week this week, so, apropos of nothing, I thought I’d share the other comments that were on my short list for the week of 9/3-9/10:

“Marty’s slow descent into alcoholism will continue until nothing is left but a goatee-stained puddle of regrets.” –dan b

“When Jon Arbuckle and April Patterson have better love lives than I do, is it time to kill myself?” –ben

“Don’t interventions usually feature your friends and family and not just a bunch of vague acquaintances? ‘Um, hello Mr. Kelrast, I haven’t met you before, but I’d like to tell you to stop … help me out Mary, is he a wino or a junkie or both? He’s a sex addict? That’s it, I’m leaving.'” –Hysterical Woman

“By the way, Dick Tracy characters don’t have sex. Ever. That’s all anyone needs, or should want, to know.” –Junior Tracy

“I am going to stop getting the news paper … period. FBOFW looks so much better on the internet than in the bathroom. I know I can get the internet in the john if I hold my laptop just right.” –comic femme

“To me, an intervention by people you hardly know could also be called an ambush. Not that there’s anything wrong with that.” –Heckler123

“What I want to know, is who exactly is in charge of the styling of the male contingent of the Mary Worth cast? Whereas Mary and her female friends are always smartly turned out, the menfolk seem to have gotten the short end of the stick vis-a-vis the attentions of the Wardrobe Department, MW Enterprises Incorporated. Just look at this sad tableau. We have Wilbur (the Combover King) Weston complete in his stylish salmon colored slacks and Wendy’s Frycook shirt (which bizarrely complements Aldo’s get-up, but that’s another story), Aldo ‘free mustache rides’ McBowl-i-cutty about whose sartorial choices comments aplenty have already been made, and as for Ian? Well, all I can say is that if he’d grow that damn mustache out for a change, there’d be that much less of his pasty face there that I’d have to look at. And he really shouldn’t dye his eyebrows like that. Ian, sweetie, EVERYBODY know you’re brows have gone gray. Just accept it, mmmkay? And let’s not even talk about that horrible horrible green jacket.” –Fred P.

“Funky Winkerbean: God, even when the strip shows teenage boys talking about hot cheerleaders, they look depressed. I hope tomorrow we get back to the more upbeat story arc about dying of cancer.” –Von Zeppelin

“That Ted sure knows how to show a girl a good time. ‘Check out the fire escape.’ ‘Wait, it gets better. Beer!’ What are they, 15 years old?” –BigJoe

“Cathy is like an existentialist nightmare, not quite like Sartre’s notion of ‘hell is other people,’ but more like ‘hell is one other person who tells you the same joke over and over again for the whole of existence.'” –Craigers

“I love Beetle Bailey. There, I said it. Beetle Bailey is out there every day reminding kids that those recruiting commercials are nothing but lies. Even if you don’t get sent overseas, sergeants are going to beat the crap out of you and pretty girls will be just out of your reach.” –MaryAnnTheRest

“The Family Circus is ALWAYS insane. This strip contributed the most to my life decision to remain childless.” –AppleGirl

I should take this opportunity to point out that, with most posts routinely getting 100+ comments, and many of those hilarious, my picks are as always arbitrary. A comment is more likely to be picked for COTW if it is pithy and stands on its own, rather than being part of a back-and-forth conversation — not to say that other comments aren’t funny, just that they don’t work as well in isolation on the top of the page.

Speaking of comments, I have a word of advice for those who find their comments getting trapped in my spam filters. One of the ways that the spam filter recognizes a comment as spam is if it is posted very quickly after the reader loads the page. This may be the case for you if you’ve already read the main post and are just responding to other comments. My advice is that waiting a little bit (even 15 seconds or so) before hitting the “Say it” button might prevent some hassle. Unfortunately, once the system really decides you’re a spammer, it can be hard to convince it otherwise. For those of you who feel that you are forever on the blacklist, please shoot me an e-mail right after you try posting something and I should be able to manually save you.

I end this rambly metapost with a couple of fun pictures. Faithful reader rodent took his wife and his Finger-Quotin’ Margo t-shirt out for a motorcycle ride over Labor Day weekend: 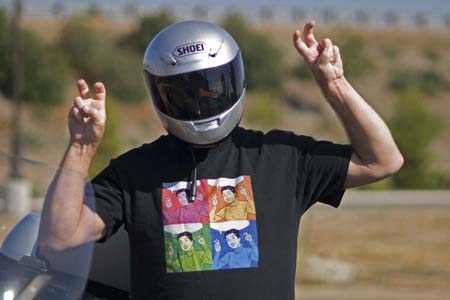 “At first my wife was a little ‘jealous,’ but I convinced her Margo meant ‘nothing’ to me,” he says.

Finally, a faithful reader (whose name I have misplaced! If this is you, please let me know so I can give you credit!) sent me this horrifying photo from an Alabama newspaper. Apparently Molly the tongue-kissing bear is no fantasy, but all too real: 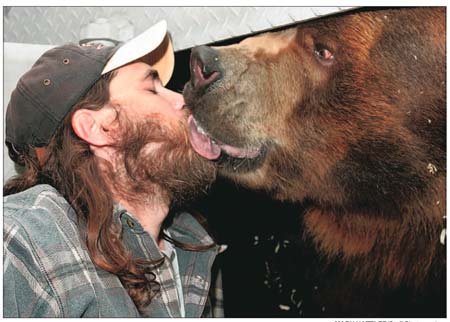 Update: This came from faithful reader Bookworm, who I don’t want to know how he found out about it.

Update 2: Bookworm is a lady! Sorry to imply otherwise!