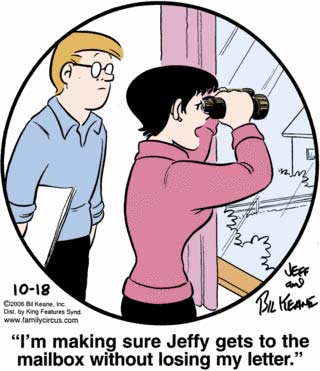 I’m going to ignore the main joke here, which involves the sort of smothering middle-class suburban overparenting that’s going to leave Jeffy a bed-wetting basket case well into his thirties, and just say: what the hell is wrong with Mamma Keane’s waist? I mean, look at it. I could put one of my hands around that. As if it isn’t enough that Big Daddy Keane made her pop out four kids with enormous heads, it looks like he also bullied her into getting some ribs removed to maintain that girlish figure. Yipes.

A plugger knows he has to keep his Oedipus complex pushed deep down inside if he doesn’t want to get a divorce.

People ask me why I read Pluggers every day. If you pay attention over the long term, patterns and character traits and plotlines emerge over time. I would urge you to revisit this cartoon, involving the same family, to really get a sense of the psychodrama going on here.