So, here’s this week’s Comment Of The Week almost-made-its. In case you haven’t noticed, this has pretty much become a regular feature at this point.

“In reality, this is how this conversation would go: ‘Honey, guess what I saw?’ ‘It’s probably some feeble attempt at ingenuity for the idiotic masses, but what?’ ‘A freaking divorce lawyer, you self-righteous piece of crap!'” –reader-who-posts

“Notice how it’s all about La Camerona. ‘I spent 45 minutes of torture inhaling Wilbur’s piercing aroma of Indonesian hair tonic and neglected genital hygiene, wasting my shrewish hectoring on this pathetic nitwit who has gone out and killed himself before he could even get depressed over my emasculation of him!'” –Craigers

“Aldo Kelrast’s death hits especially hard as he was the only character in the Worthiverse that had anything resembling ‘passion’ or ‘basic wants.’ His death is the final proof that in Charterstone simple human emotions are not only undesirable, but deadly.” –Anonymous

“For those reading Cathy this week: What is up with the war against business casual? Did a t-shirt kill her dog or something?” –Shawn Struck

“What kind of cop just strolls in to say, ‘YEP, IT’S SAD, BUT ON THE OTHER HAND, OH WELL.’ I submit that this is not, in fact, a real cop, but instead a stripper that Mary & friends hired for Aldo’s wake. And before you ask what kind of stripper delivers a sermon on the dangers of drinking and driving and doesn’t remove a stitch of clothing, it’s the kind that Mary Worth would hire.” –SarcasticAcid

“As the days pass within the sinister case of Aldo Kelrast, Charterstone Stalker, I feel sorry less for Mary Worth and more for Toby Cameron’s pants.” –Dingo

“I suspect that Anthony will be strangely envious of Grampa’s corpse being, as he is, dead on the inside already.” –michael

“Margo apparently still has it, whatever ‘it’ is.” –LynnyM

On Mark Trail: “Also, for a few days we’ve been watching these bears in the woods and not once have we seen any signs of defecation by either animal. I guess thats the answer to that philosophical question.” –MGArchitect

“OH MY GOD! THERE’S FIRE IN GIL THORP! Fire, I tell you! Fire = adventure! It’s almost a substitute for a coherent plotline!” –leathermessiah

“Planning Eric Mill’s niece’s birthday party takes PREPARATION, dammit. It’s not like she’s planning an invasion of a third world country or anything. There are lots of variables. If any one goes wrong, disaster could strike. For example, what if one of the kids pukes into the whiskey fountain after doing a keg-stand? What are you going to do then? The obvious — start serving up shots straight from the bottle. But there have to be fresh bottles and chilled shot glasses immediately available. Planning, people! Planning!” –hogenmogen

“On the FBOFW site, they animate the comics. Granted, this animation frequently consists of nothing more than characters blinking, but the idea is that is makes them seem more ‘alive’. I just use it to scare my little son.” –Zikar

“Today Toby and Chinbeard finally realize the life-truth that Aldo knew all along: The best sex is always with the totally wrong people.” –AppleGirl

“Today’s edition [of RMMD] is, as is par for the course, awesome. No, I don’t know who those people are. (And you don’t either, so stop acting like you do.) But I can tell that they’re totally awesome! Will there be a tie-in between these lowlifes and the egregious purse-napping June suffered a few days ago? Who knows? But I’m guessing this: ADVENTURE!!!!” –Fred P.

“In the way in which young people can be clueless as to the (ick) continuing sexual activities of their progenitors and elders, Gina is so proud to make it crystal clear to the old biddies who made her dinner and cleared her plates that she’s leaving to ‘do it,’ while oblivious that Margo has just returned form a day-long brunch ‘date,’ and Tommie is still satisfied from scorning and humiliating Ted just the other day.” –ohyes

“Normal people would use the guns, but [The Phantom] is a strip in a paper where kids can read it, and they have to learn ‘family values,’ such as punching people and throwing them through windows instead of shooting them.” –hogenmogen

“It is entirely possible that Spider-Man is a cartoon strip which doesn’t actually have a ‘best character.'” –Fred P.

Also, faithful reader Dadzilla sent me this picture of his encounter with a bear statue. The statue didn’t understand Dadzilla’s hostility. 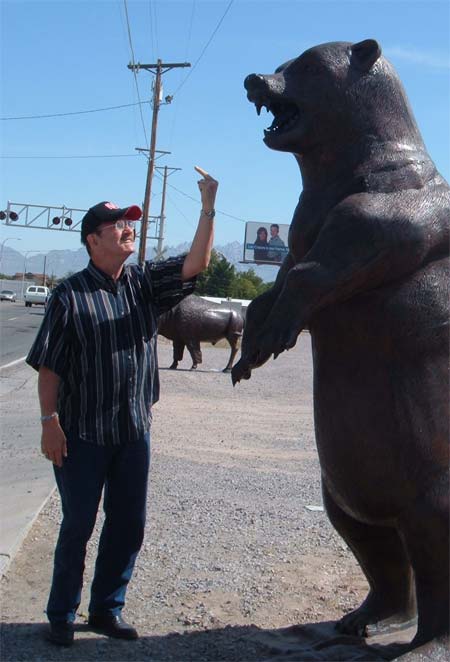