So much to cover from this weekend’s developments! 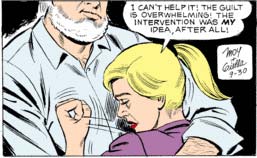 In Mary Worth, Ian demonstrated that the hot air that keeps his chest puffed up is of a sufficient pressure to withstand Toby’s feeble pounding.

In Gil Thorp, somebody admired somebody else’s shapely buttocks. 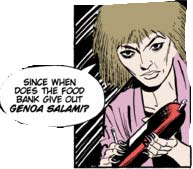 Rex Morgan, M.D., proved that even sinister poverty-stricken skanks recognize high-quality salami when they see it. 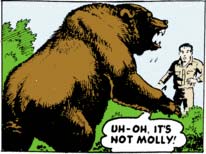 In Mark Trail, we learn that Mark’s wildlife-identification skills may not have been all that he made them out to be. 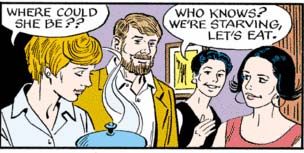 And in Apartment 3-G, we discover that Margo first reaction to the disappearance of one of her roommates is “more food for me”…

…and that, against all odds, the Professor is getting more action than anyone else in this strip.

But still, I think the most important events this weekend happened in Judge Parker. 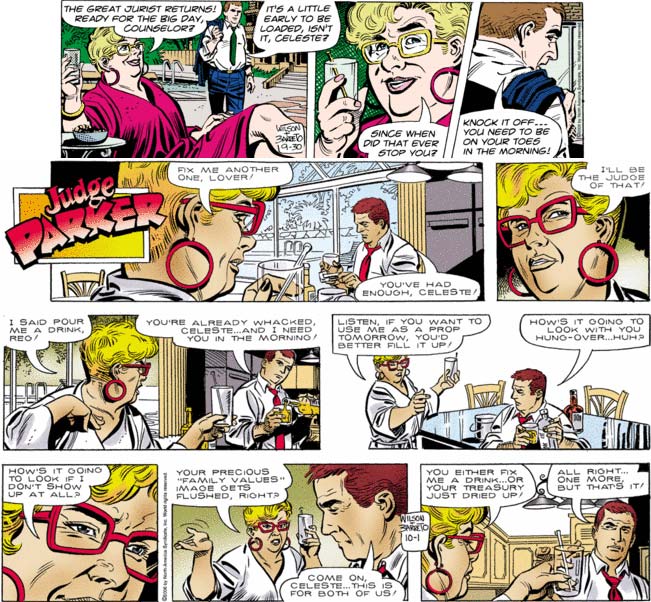 So we all knew that Reggie Black’s “family values”-based campaign against the mysteriously single, suspiciously well-groomed, and blatantly porn-star-named Randy Parker would be hilarious. What we didn’t know was that it would be a full-on frontal attack on heterosexuality itself. After all, the strip seems to be saying, any woman you marry will just turn into a tubby, emotionally abusive drunken lout who, if not for the 80s-vintage glasses and earrings, resembles nobody so much as Brent Raptor’s mom. And if that’s where the straight lifestyle leads, gentlemen, wouldn’t we all be better off in the company of men?

On Monday, meanwhile, the strip posits a related thesis: that heterosexuals should not be allowed to perform makeovers.