I may have taken a good chunk of this week off, but you sure didn’t! In addition to discovering a mutual love of Mystery Science Theater 3000 (a love that is shared by your humble blogger, it will probably not come as a surprise to you to learn), you came up with any number of amusing witticisms, of which following was judged, in our arbitrary way, the wittiest:

“There may be better euphemisms for sodomy than ‘Liz Ritter all but forces Stormy Hicks to go to The Bucket,’ but it’s hard to imagine any.” –Smitty Smedlap

And the as always almost as hilarious runners-up:

“‘As you’ve heard, I give advice.’ The list of Sentences Never Uttered Anywhere But In Mary Worth just keeps getting longer and longer.” –gump worsley

“Given the … unusual … placing of Gunk’s eyes, I’m thinking that Flyspeck Island is so tiny that Gunk’s great-great-great-grandfather is also his brother and his mother is also his sister. Perhaps ‘Take me to the mailbox’ is Gunk-speak for ‘Please put a bullet between my hideous fish eyes before I commit more atrocities against genetics.'” –Wirrrn

“It doesn’t seem like Celeste is actually having much FUN being such a beeotch about this campaign. Perhaps she should have used her money to buy a cruise ticket instead. Or a bar.” –Poteet

“Things to ask when your partner in crime goes to investigate a barking dog, you hear a strange voice yell ‘He’s with me!’, followed by the sound of a jawbone being crushed and the thud of a body crashing to the ground: ‘Did you find the dog?'” –Sharkbait

“Is there any place in the world where Niki’s hair would look cool? Or fashionable? Or even not totally insane? A dark underlayer with pointy little sideburns, topped by a starfish of horizontal spikes. Never mind why you would want to do it: HOW could you do it? Elmer’s glue and a cordless drill?” –Proteus

“PS: When did Tommie start dressing like she works at Dunkin’ Donuts? Always? Oh, OK. Thanks.” –Badly_Computer_Animated_Boy

“I liken [Apartment 3-G] to ultra-high-speed footage of car safety tests. For what seems like ages we watch the stage get set for a violent spectacle. In agonizing slowness we bear witness to the 2006 Ford Bronco of the other girls’ lives screech straight into the unyielding brick wall that is Margo. Sure, it may take hours, but when the inevitable fiery crash happens, we’ll get to see every fragment of safety glass scatter as Lu Ann and Tommie’s hopes and dreams are hurled through the windshield.” –Trent

“As for the A3G Thanksgiving, I still think Margo’s going to give, or at least attempt to give, everyone smallpox.” –Mikel

“Having never had a gun pointed at me, I’m not sure how I’d react. Demanding the person holding the gun reveal his identity, however, doesn’t strike me as likely. I imagine pleading with the person not to shoot, and maybe inquiring what I can do to make the not shooting more likely. Once the guy started talking about his friend’s bear, I’d know my fate was in the hands of a madman, and I could only hope his rant went on to encompass Dallas in ’63, or the satanic origins of the UPC symbol. I guess I might consider that someone that crazed might not even think to LOAD a gun, but the snarling attack dog glaring at my genitals would probably just cow me into silence.” –Donald The Anarchist

“Man, Ella sure does bring out the platitudes in Mary Worth. I have feeling these two could carry on a conversation in nothing but droll witticisms. In fact, it’s as if they are occasionally slipping into their native language, sort of the meddling biddy equivalent of Yiddish.” –Bobdog

“Not to make light of Elizabeth’s serious legal and emotional situation happening in FBOFW, but good lord, what is wrong with her mother’s nose? –CHA5NCE

Also! It may have slipped your mind that fine boat wresting merchandise is available for purchase, no doubt because you are the type who finds it difficult to concentrate on abstract concepts in the absence of visual reinforcement. Well, to offer up just such a memory aid, I present this photo of faithful reader Gadge Cubic, Mole Preener (who is also The Artist Formerly Known As 2fs) attempting to wrestle a wild boat in its native habitat. 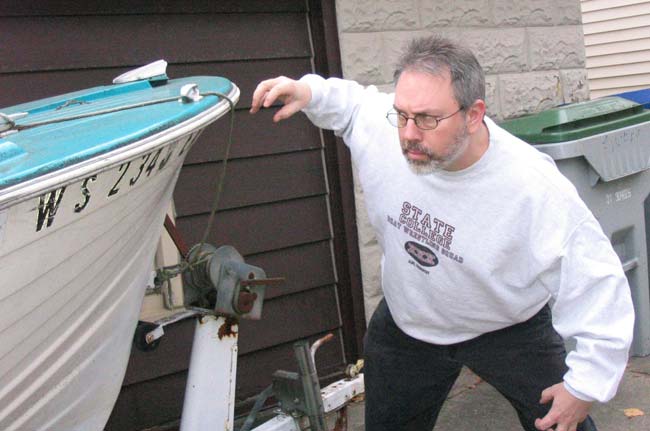 More merchandise of this general tenor is available at the Comics Curmudgeon store at CafePress.

And finally, we must as always give thanks to our sponsors:

I’ve tweaked the ads a bit this week: you can now buy the guaranteed top spot in the left-hand nav bar, and you may have noticed the new ads at the top right of the screen, provided through Ryan North (of Dinosaur Comics fame)’s new Project Wonderful network. For more details, check out our advertising page.