As this Thanksgiving holiday weekend draws to a close, I really am grateful for a lot of things in the comics pages. For instance, I have to give thanks to Rex Morgan, M.D., for producing this panel: 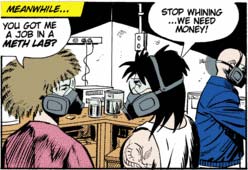 And to Judge Parker, for this lovely image:

And to Sunday’s Mark Trail, which featured a conversation taking place between a nut-nibbling squirrel and a leaf, while an eight-year-old adds his own commentary, featuring the word “Etc.”: 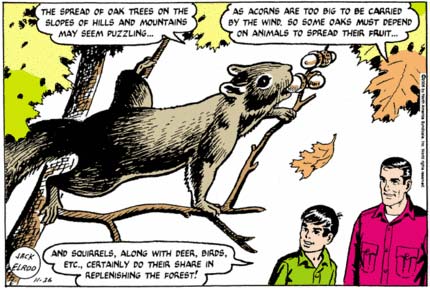 And, now some full-length comics thanks.

Is there anything sexier than a heavily armed and emasculating Kelly Welly? Mark has the vaguely amused and/or smug expression of a man who’s no longer engaged in the little drama going on before him, but appreciates good work when he sees it. By the way, Ella isn’t the only one in the funnies with psychic powers: Mark was so sure that this adventure would be resolved on the 24th, he had the date stitched just above his left breast pocket.

Man, I guess this goes to show why I wasn’t much of a player back in my single days. Because apparently worming your way into other people’s Thanksgiving dinner by acting mopey rates makes you “Mr. Smooth,” whereas I would have thought it made you “pathetic.”

You can insert your own “stuffing the turkey” and/or “gobble gobble” jokes here.

I earlier touched upon the fact that everyone in this little scenario seems to mysteriously have no family to share Thanksgiving with, but it occurred to me today that Margo in fact lives in the same city as Gabriella, her comical immigrant mother. Presumably as a foreigner she’s unfamiliar with the concept, and nobody’s told her about it in the decades she’s lived in the United States so that they don’t have to invite her to dinner. 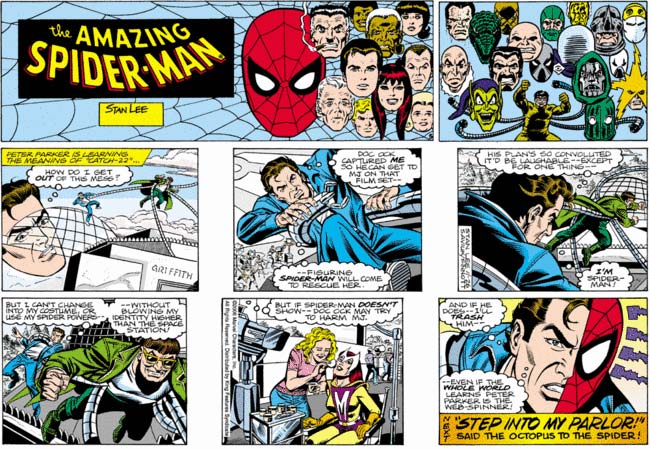 And finally, we should all give thanks to Peter Parker today, who spent his Sunday thoughtfully narrating the entire current Spider-Man scenario in his head in great detail for those of us who were having trouble keeping up. If only the type in the word balloons had been a little bigger, we might have been able to eliminate the superfluous pictures entirely.

I spent part of this weekend with my mom’s side of the family for our traditional Christmas at Thanksgiving celebration, and one of my little cousins squealed with glee at receiving a set of Spider-Man action figures. Since my main contact with this franchise is through the newspaper strip, I was surprised that that Spidey didn’t come with a couch and television set as accessories, or feature extra whining powers.