When I logged on to my custom Houston Chronicle comics page this evening, I discovered that, alone among my chosen strips, Pluggers was refusing to load.

What could have caused such a thing to happen? Was it the Democrats? Was Pluggers’ down-home wisdom too true for Nancy Pelosi and her chardonnay-swilling crowd? Eagerly, I rushed over to the Pluggers Web site to find out precisely what truth it dared to speak to power. 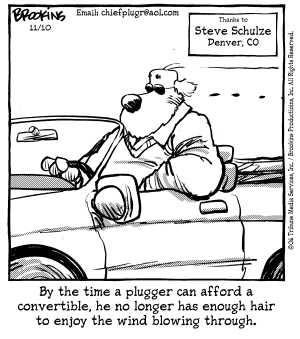 I was kind of dissapointed. Ha ha, it’s funny because he’s bald! I’m a little concerned about the stream of black dots emerging from the back of his head, however. They seem to be the same color as his eyebrows, more or less. Are those the last chunks of his hair, flying away in the breeze? Was that fancy sports car really worth the last shreds of your head-covering dignity, bald dog-man?

I usually leave the silent penultimate panel watching to the Silent Penultimate Panel Watch, but the instance in today’s One Big Happy was particularly interesting. Panel three captures that awkward moment in which you’ve told a joke and nobody gets it and so you have to stare or gesture or something to drive your point home. Of course, the advantage of being in a comic strip is that such awkward moments don’t have to exist; Joe’s joke would have worked without that silent third panel. With that panel in there, however, I almost think the strip is supposed to be less a vehicle for Joe’s slam on Ruthie and more an examination of how poorly he told it. His use of the phrase “real fast” in the final panel is undermined by the silent frame that preceded it, which, since comic time is ultimately determined by the reader, could last as long as you care to stare at it.

Grandpa, as usual, would rather be somewhere else. 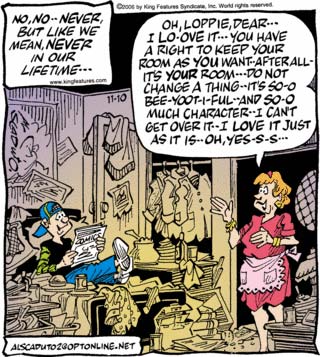 Having apparently completely exhausted the inventory of things that they will do every time, TDIET has now apparently decided to move on to things that even it admits they will never, ever do.