I’ve been sitting on all kinds of random stuff for a while, and why not throw it all together in one big metapost of FUN?

OK, first thing’s first: Readers! Do you live in, or near, New York City, and/or will you be in New York City on the evening of June 22? If so, you will have your chance to see the world-famous Comics Curmudgeon (aka me) make an ass of himself his first foray into live comedy-style entertainment! I was invited by a faithful reader who’s also some sort of big-city entertainment impresario to participate in an event called ROFL! The deal is that I and seven other hilarious individuals will present and/or explicate to the audience hilarious material we find in the depths of the Internet. Our performances are pitted against one another until one emerges the ULTIMATE CHAMPION! Victors are determined by audience hooting, so obviously I need to pack the joint with my supporters. The event is at Joe’s Pub, which is at 425 Lafayette Street, between Astor Place and East 4th Street, in Manhattan. You can buy tickets online for $12 plus services charges, or just come directly to Joe’s Pub or the Public Theater and avoid said service charges. I will be pimping this again closer to the actual event, unless I hear that it’s sold out, in which case I will mock you suckers who didn’t buy your tickets in time, so you should probably get your tix now, and buy an extra one in case you fall in love sometime in the next three weeks.

Speaking of random sort-of-related-to-comics things I do, I recently managed to bring together the comics-loving and tech journalism sides of my soul by doing an audio interview with Ryan North, creator of the ever-awesome Dinosaur Comics. We talked about Project Wonderful, his new auction-based ad system, which appears on many comics-related Websites (this one among them). You can check out the interview at ITworld.com — either read the transcript or, if you’re interested in finding out just how pinched and nasal my voice is, listen to the audio.

Changing the subject entirely: Many of you are no doubt familiar with Alison Bechdel, the writer and artist behind the long-running and much-beloved underground Dykes To Watch Out For strip (note: contains occasional nudity), who found critical acclaim last year for her graphic novel memoir Fun Home. What you almost certainly don’t know, however, is that she’s a longtime Mark Trail aficionado. She sent me this parody from about 12 years ago featuring Mo, her DTWOF protagonist, as the Man Himself:

Speaking of comics that contain occasional nudity, I’ve been meaning for a while to direct your attention to The Fart Party, a Webcomic by Julia Wertz, just because I love it so.

Speaking of comics that we should all be glad do not contain occasional nudity … have you ever wanted to illustrate a bit of FBOFW foefic? Web comic superstar T Campbell, who writes for Penny and Aggie and a whole bunch of other stuff, is looking for an artist for a Foob-related thingie he’s got cooked up. If you’re interested, e-mail him.

I conclude with two random bits from readers. First, faithful reader Kevin illuminated the thought process of many in regards to Apartment 3-G:

And faithful reader Mooncattie brought his Margo!Boxcar!Saturn! mug to the heart of Foobness itself — Toronto city hall! 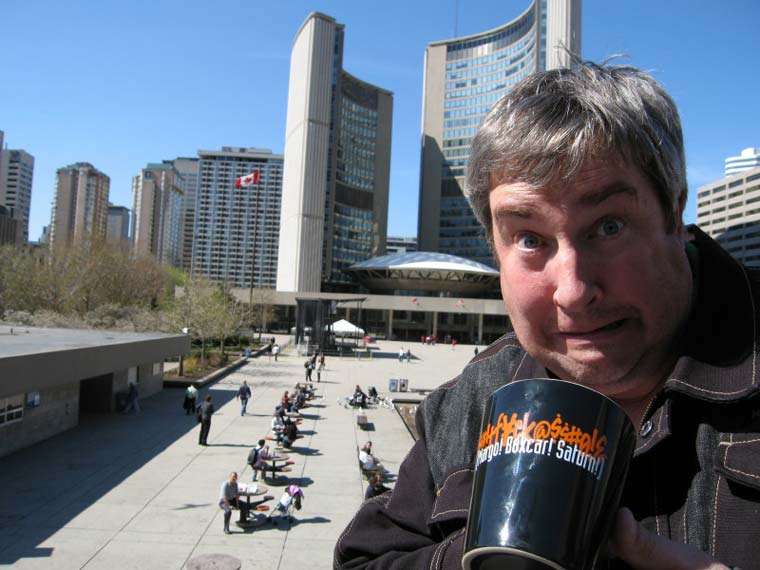 Oh, and, uh, in regards to self-clubbing Tyler: I’m going to have a winner picked out … real … soon now. Real soon. Hey, choosing the best one is h-a-a-ard, OK? I don’t like making decisions! WAAAAHHHH! [Further Mike Patterson-style whining.]