While I’m not a morning person and sympathize with Beetle’s attitude, I’m a little unnerved by the way he goes about expressing it. Specifically, who exactly is he ordering to “go away” and “leave me alone”? It seems that he’s so haunted by this world that he’s addressing existence generally, preferring the icy numbness of sleep or even death to consciousness. Alternately, since he is Trixie Flagston’s uncle, he may be railing against her buddy Sunbeam, hinting that this is a relationship that can go sour once you grow up.

I had high hopes that crafty old Clambake was going to launch into a detailed treatise on just when and how you launch a beanball at a batter for maximum psychological impact. Instead, he appears to be giving young Elmer a “we black folks have it much harder than you Mexicans or whatever ever will so shut your yap whippersnapper” speech, which will inevitably result in either a soul-searching look at prejudice in a new, multiethnic America or an all-out race war, neither of which I’m interested in seeing in Gil Thorp, now or ever.

It’s nice to see the most personable and attractive Gil Thorp recurring character in panel three. I’m talking, of course, about the disembodied alien claw-thing perched on Elmer’s shoulder. It sure loves to sit on people’s shoulders, but it don’t mean no harm to nobody.

I’d fling my food at my parents too if they tried to feed me that undifferentiated inky black goo. It’s like a bowl of finely minced despair.

Mary Worth is looking more skeletal and Nancy Reagan-esque than ever in panel two. I have no idea whose enormous hands those are flapping around in front of her, but they clearly aren’t hers. Perhaps they were once attached to her latest hapless victim, the remainder of whom is baking in a casserole dish back in her apartment, to be force-fed to Vera later this evening.

I know it’s all part of the Great Cycle of Barnyard Life, but, like the duck in the pond, I am a little unnerved to see that fox’s last moment of happiness before the farmer beats him to death with that stick. I guess the lesson is: if you’re a fox and you like getting into other people’s business, get a cape and a deerstalker hat and learn to spout some deduction-y sounding bullshit. Otherwise, you’re fair game. 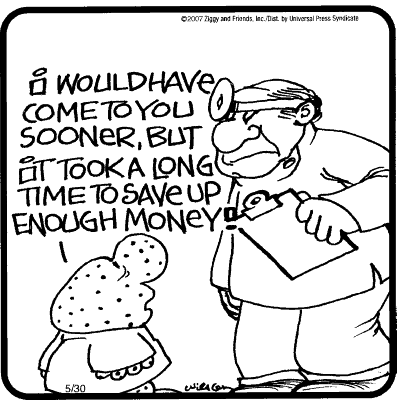 Ha ha! Ziggy is going to die of smallpox, because he’s poor!