So, after three years of doing this site, I’ve discovered The Rex Morgan Problem, which goes something like this: The set-up for each storyline is delightful, but once we get to the climax, my interest suddenly deflates. Rex and Troy’s gay golf game kept me in stitches for hours! But then there was blackmail and SWAT teams and ZZZZZZZ. June and a 12-year-old banter about oral sex! But then there was an attempt to kidnap or kill him or something? YAWN! I’m beginning to suspect that it’s my problem, not the strip’s. Anyway, this is my apology for cutting back on my RMMD coverage just when it got ostensibly “exciting.” See, they found Milton and suddenly Pete the Chauffeur, who has seemed like a good guy all this time, is suddenly fleeing with Heather in tow because … he’s bad? Somehow? And now that Milton is really alive his hopes of being the power behind the throne are dashed? Also, he’s in the NSA? And the Chinese are involved? Maybe? But I don’t really care. Honest to God, can we just go back to June insulting civil servants and Rex being a dick to everyone because an uncomprehending world won’t accept him as he is? Because that’s what I tune in for.

I do like today’s last panel: if Rex were an ordinary protagonist, his implication would be “The cops won’t be able to find him … so I will!” as he drives to Pete’s secret hiding place that only he’s smart enough to discover. But this being Rex, his implication is “So, there’s no hope and we might as well move on,” and his destination is the office. Or Baskin-Robbins. 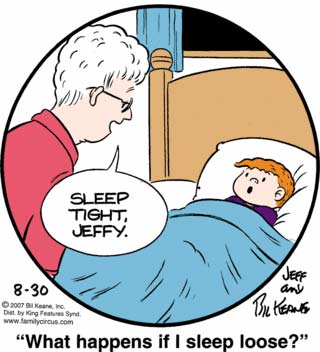 This is my favorite kind of Family Circus: the kind where Jeffy is aggressively ignorant. He knows that everyone else in the family thinks he’s a moron — deep down, he probably knows that he is a moron — so he figures he’s just going to make their life difficult with it. Today we have the typical kids-say-the-darndest-things-because-they-treat-idioms-literally schtick, but there’s something about his attitude that says that he knows his little question is going make grandma regret coming over to try to relate to the little rugrats. “Gosh, grandma, how does ‘tight’ relate to sleeping, huh? Are we talking about my bowels? Because mommy says I have to sleep with those tight. What if I sleep loose and poop all over the bed, huh? What if that, huh? Grandma? Huh?”

OK, the MUNCH MUNCH MUCH I can deal with. I get it, the damn dog is chewing his way through bags and probably boxes to devour all of his family’s food before they get a chance to do so, sure, whatever. It’s the LICK LICK that really makes me uncomfortable. I’m assuming that he’s slobbering all over the grocery items that he can’t get down his ravenous gullet — the canned goods, the frozen foods — so that it’s all covered with a thick layer of viscous Great Dane drool. He may not be able to eat it, but he’s going to make sure that it’s so disgusting that his owners won’t want to either, because, fuck you, he’s Marmaduke. 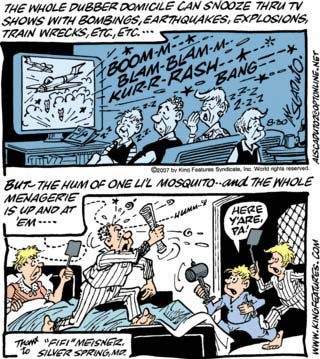 (“Hmm, lotsa shootings in this one … huh, that fella lost an arm … howja think they did all that fake blood, witha computer?”)

But! Let ’em see one li’l nipple … and the whole menagerie is up and at ’em!

(“Awk! Filth! This is disgustin’! And little Hekkie saw it! He’ll be scarred for life … I’m writin’ Senator Blowhard … an outrage … should be able to watch HBO at 10 pm without seeing this garbage …”)