It’s that time again … the time for the comment of the week!

“Isn’t it possible that when Momma says a young lady is ‘very nice,’ she really means ‘a hot chick who’ll sleep with anybody, even my idiot son’? I don’t know who ‘they’ are, but it seems unlikely that Momma’s gossip-yenta social circle wouldn’t know exactly what kind of a girl Freda Klotz is. A classic enabler, she’s basically telling Francis, ‘If you’re going to put your wingwang in every slut in town, at least make it my friend’s daughter so we’ll have something to talk about at the sewing circle next week.'” –BigTed

And the as-always hilarious runners up!

“Dude, if you’re not going to give Marmaduke your ice cream, keep it away from his gaping maw! Chocolate mint dog drool is the favorite flavor of no one.” –Artist formerly known as Ben

“MT: What, is Evil Sideburns Guy going to tap the duck to death with his medium-sized branch?” –Inspector Dim

“Faye was supposed to be goth? I thought she looked like a Japanese boy who really enjoyed Back to the Future.” –Darkefang

“Let’s face it: For Better or For Worse is similar to Tolstoy’s War and Peace in the amount of characters that trod across the page but without the charm or whimsy.” –Dingo

“In other news, and I know this has been asked many times, many ways, but what the f*** is up with Gil Thorp? Why the gratuitous crotch shots and the weird misshapen bodies and the physically impossible angles and the … and the … I don’t think this blog would be complete without someone having the weekly Gil Thorp freak-out. I like to call them the ‘GTs.'” –Big Sims

“I find it curious that Jack Elrod follows a birds-aren’t-really-here-someone-with-sideburns-placed-them-here storyline with a birds-are-in-the-way-but-now-they’re-really-here-and-a-sideburned-guy-wants-to-kill-them storyline. It’s all going to end up with a disillusioned Mark Trail with a sore fist leaving the forest and going on a journey to discover himself. Watch his unshaven self sock jaws on a whaling ship along with his newfound hippie Greenpeace buddies, thinking, ‘This feels good, but … is it really who I am? I must find out!'” –MrP

“Homer’s devotion to that stupid, stupid duck is starting to piss me off. I hope Shirley gives him the bird flu, and he dies and collapses on top of her eggs, and the impatient boss has his corpse paved over to use as a Homer-shaped speedbump in the parking lot. That is a store I would attend very, very often.” –Rhekarid

“I can only hope the descent into FOOB Rashomon leads to Elizabeth remembering the same trip, only with a murder.” –js

“This is the first FOOB in a long time to which I could relate; I too was vomiting by the last panel.” –McManx

“Oh man. Brad and TJ are so going to gay it up together. God, I hope that even more comics start having gay subtext. Hell, this is hardly even sub. (Feel free to come up with your own jokes here, involving the word ‘sub,’ and possibly the word ‘hardly.’)” –Sensitive Poet

“I see Milford is just like my hometown! Their football pep rallies feature a summoning ritual, and they bask in the nimbus of their demon masters.” –migellito

You commentors aren’t just making funny comments: you’re also proving yourself braver than I by leaving the house and the warming glow of the computer screen and hanging out with one another (gasp!) in person! And there’s photographic evidence, even. Here are faithful readers (from left) Trilobite, Mountain Momma (with a signed TDIET based on her idea, coming soon to a newspaper near you), the Divine O’Fogeyette, and Bats :[ (with Bill the Cat and Jeffy Keane’s freakishly large head). 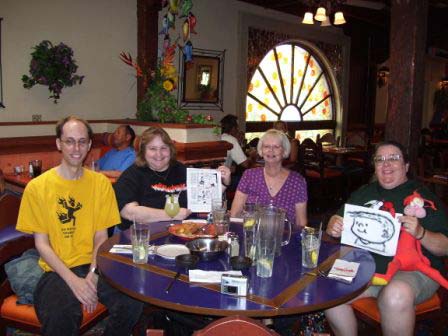 And there’s more to come! Faithful reader The Spectacular Spider-Brick would like anyone interested in a Madison, Wisconsin-area meetup to e-mail him at flagator@gate.net. And a northern California meetup also seems to be in the works! Because I can see this going quickly out of my ability to keep up with everyone, I’ve created an area on the forums site specifically for coordinating your Curmudgeon get-togethers. Let me know how it all goes!

And finally, we must as ever give mad props to our advertisers.