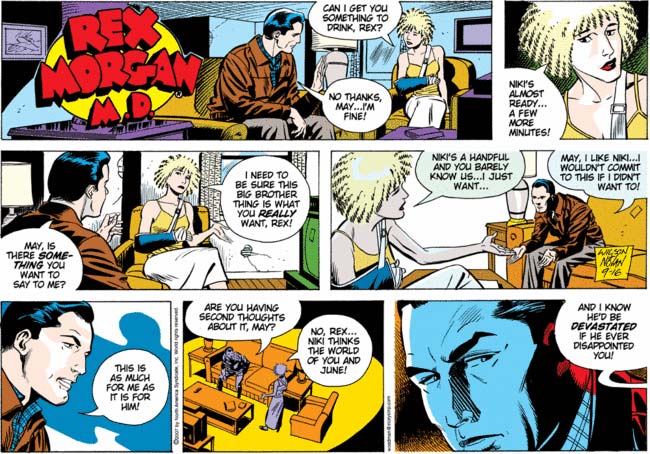 Well, hello there, radical disconnect between tone and subject matter! How nice of you to drop by today and hang out with Rex Morgan, M.D., for a bit! With Rex sitting there all stoop-shouldered and palms-upraised on May’s shabby couch, he looks less like he’s going to be taking Niki on a fun fishing trip and more like he’s representing the loan shark and is here to finally collect on that long-standing debt, and he’s really sorry, but if May doesn’t have the cash, he’ll be taking one of her thumbs. The final panel is just entirely baffling to me: it’s a damn fishing trip, how disappointing can it get? “May, I’m afraid that after six hours, your son wasn’t able to catch a single fish, so obviously there won’t be any need to repeat this fiasco. And your further services won’t be required down at the clinic either.”

The less said about “This is as much for me as it is for him!” the better, obviously. 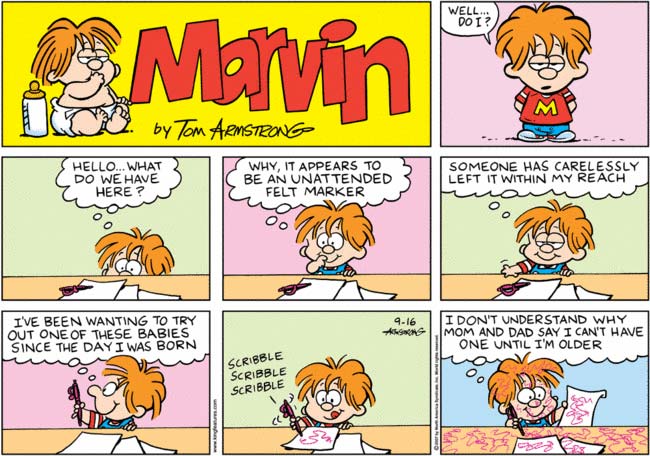 I’m mildly befuddled by the first panel in the bottom row here — “I’ve been wanting to try out one of these babies since the day I was born!” Has evolution finally programmed the urge to draw with felt markers — and, perhaps more important, breathe in their sweet, heady fumes — right into the DNA of every member of our species? Are we literally born to vandalize? But that’s nothing compared to my profound disquiet at the throwaway panel at the top right. Well … does he? Does he? Does he what? What does Marvin do? And, more to the point, why is Marvin speaking this question aloud rather than thought-ballooning as is his usual wont? Can you imagine if your toddler, who previously was incapable of speech, came into your living room, standing up straight with his hands clasped behind his back, heavy-lidded with ennui, and said, “Well … do I?” Would your first instinct not be to brain the unnatural creature with a shovel? Maybe that’s just me. 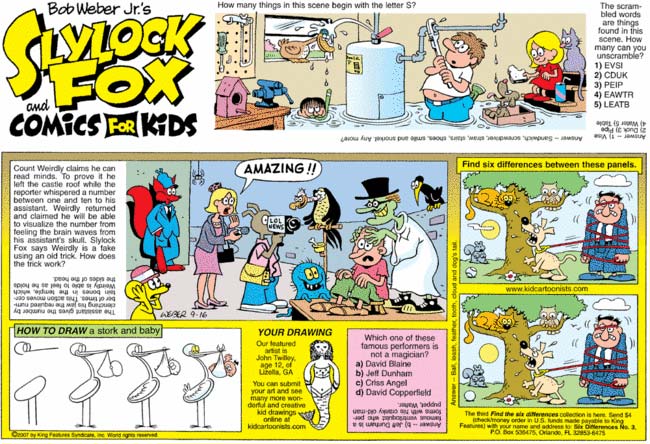 I’m beginning to think that Count Weirdly needs some sort of image consultant or stage manager. I can’t figure out what the solution of this puzzle is, and the text is too small to really read, but I’m assuming the Count and his bald-headed accomplice are communicating with the usual run-of-the-mill vaudeville trickery. Meanwhile, Weirdly’s greatest scientific triumph, a furry, jagged-toothed tentacled creature, possibly an animated towel of some sort, skitters about grinning with no acclaim or notice. That thing ought to be the centerpiece of his act, not his feats of phony phrenology. I do like the fact that Max is clutching his head in terror, convinced that Count Weirdly can read every thought in his puny (and no doubt very filthy) mouse mind.

In the “how many things start with S” cartoon at the top, this family seems way too blasé about the inevitable mold problem that will visit a lifetime of respiratory problems upon them and render their house completely unsalable. Maybe they just get sadistic enjoyment from the man of the house’s incompetence. “Come on, Billy, let’s go downstairs and watch daddy fail again! I’ll make sandwiches!”

Today’s Mary Worth was six panels of snoresville capped off by one panel of delightfulness. Watch out, Drew and Vera! Your horse-drawn happiness is about to be rudely interrupted by Dawn Weston and her tiny, tiny fist of fury! Dawn, since Drew is dumping you because you’re too young, it was a pretty clever idea on your part to show up wearing a collar that makes you look like a twelve-year-old.