I swear I’m not obsessed with the sex life of the Apartment 3-G girls. If anything, I’m obsessed with how any feature that’s about three single young women in New York City can be marked by such a stunning lack of sex, which, I’ll try gamely to argue, isn’t quite the same thing. Anyhoo, I’m always open for any hint that I might be wrong, and we’re getting some hints today. Note that Lu Ann isn’t responding to Tommie coming home in the morning with “OH MY GOD TOMMIE WHERE WERE YOU WERE YOU KIDNAPPED??” but “Huh, you’re not wearing the same clothes you left the house in last night, plus I don’t see any hickeys.” So, while Tommie didn’t get lucky last night (obviously, ’cause she’s Tommie), the idea isn’t completely out of the question for even goody-goody Lu Ann.

It’s also possible that goody-goody Lu Ann thinks that Tommie and Gary engaged in some “Naughty Nurse”-style role play after their date, and is goody-goody enough that even this extremely mild kink would drive her to two question marks’ worth of shock.

I can’t really remember — is Dr. Kelly another bland lookalike vying half-heartedly for Tommie’s affection? It’s nice to be wanted and all, but I have to imagine that forcing a lady to leave in the middle of a date just so she can sew together New Years Eve drunks with you rates pretty high on the old Actionable-Sexual-Harrasment-O-Meter.

Panel two proves that the absence of ESP is in fact an evolutionary advantage: if your potential partners could hear what you were thinking in the moments leading up to sex, nobody would ever reproduce. I’m not sure if Drew is supposed to be adjusting his nonexistent bow tie or if he’s just relishing the thought so intently that he’s unbuttoning his shirt right there in the local cafe. 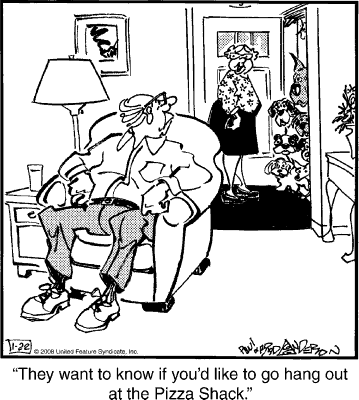 A roving pack of semi-feral dogs has eaten fourteen elderly residents of the neighborhood so far, luring them to deserted parks with promises of companionship and pizza. Authorities urge citizens to stay indoors until the National Guard can defeat the savage canines.