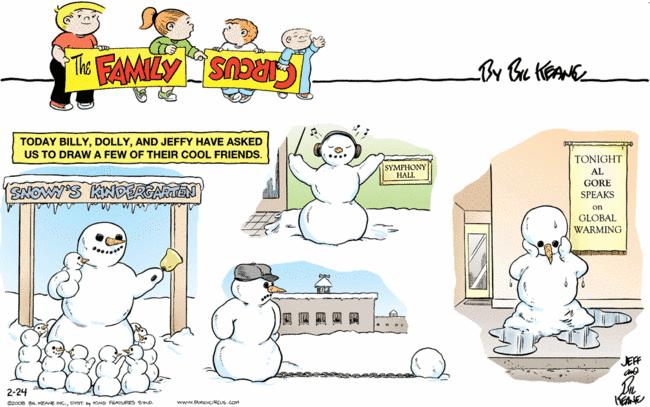 O Sunday Family Circus, why do you insist on the being baffling and totally insane? These snowman scenarios grow increasingly deranged and disturbing as you move clockwise through the strip. “Snowy’s Kindergarden” is forgettable treacle; one might be tempted to gloss over the Symphony Hall entry with equal speed, except that upon closer inspection it appears that our be-headphoned conductor snowbeing may actually be inside the symphony hall? And if so, would there by any more disturbing moment for a professional concert musician than coming into work one day and finding a pile of snow on the floor and a ghastly simulacrum of your conductor grinning dumbly and listening to headphones?

From there, it gets worse. Obviously the melting snowman at the global warming talk is a horrifying nightmare; the way it’s cradling its head, desperately trying to keep it from falling off its rapidly shrinking neck and rolling across the floor, would be poignant if it weren’t so terrifying. And finally, we arrive at … OK, where is that? Does that building in the background have bars on the window? Is that snowman in prison? My God, it’s in prison, isn’t it? And that rolling ball in front of it is … what, exactly? The severed head of a prison snitch? The mind boggles?

If we want good, old-fashioned fun, we need to turn to people who know how to have a good time … pirates! 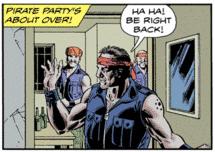 WOO! PIRATE PARTY! Even when it’s about over, you can see they’re having a good time, because they’re still laughing it up! With their pirate antics! WOO! HA HA! Sunday’s strip got all Phantom-fisty and skull-marky after this point, but I just wanted to linger on the moment when the pirates were allowed to have their fun.