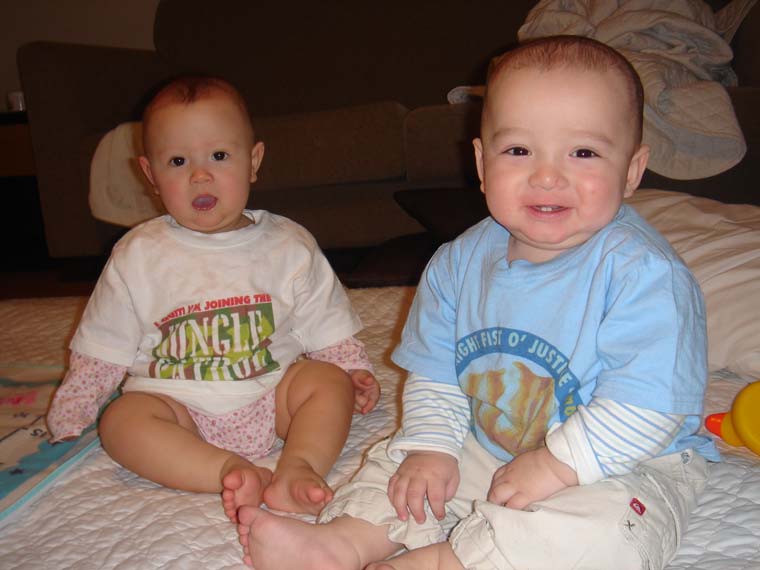 The Parsnip clan was on a trip to Korea when this pic was taken, which means that the sight of Jungle Patrol and Fist O’ Justice themed paraphernalia was probably even more baffling to passersby than usual. Remember, it’s easy for me to put logos on baby and toddler clothes, so email me if you’d like to make sure that 20 years from now your kids find their baby pictures completely inscrutable.

Speaking of Fists O’ Justice, a faithful reader sent me a link to their new blog: The Fists Of Justice League! Basically, it features Mark Trail and other comic characters punching people. Check it out!

“It strikes me as admirably in character that Cathy has an untidily assembled sack of ‘Tax Stuff.’ Undoubtedly she has a whole closet full of shopping bags variously labeled ‘Diet Brownie Recipes,’ ‘Oprah Transcripts,’ and ‘Rejected Bad Hair Day Joke Submissions to Reader’s Digest.’ (Oh, Cathy! We know you’re having a bad hair LIFE!!!) The largest of these, ‘Suicide Notes,’ is actually the most organized, broken down as it is into subcategories such as ‘Irving’s Fault,’ ‘Irving’s Parents’ Fault,’ ‘Swimsuit Manufacturers’ Fault,’ and a simple ‘Ack!!’ in an assortment of fonts.” –Violet

And to give appreciation to our runners up!

“This new Mary Worth storyline has so much potential — potential for DEATH!” –Mrs. Buck Tuddrussell

“We finally get a look at one of Alan’s paintings: a monochromatic cityscape. Well, I guess they say ‘paint what you know,’ and if there’s one thing Alan knows, it’s the view out the window of his studio. That, and shooting smack.” –The Spectacular Spider-Brick

“You cannot make both art and money. Alan is still on drugs.” –doug rogers

“That’s right Lu Ann, go make that tea, men are talking. Your flighty blonde femininity would only dilute the raw masculinity that now permeates this room, neckerchiefs and polo shirts aside.” –Mr. Lemon

“I would like to make a guest appearance in [Funky Winkerbean] as a smiling killer. I’d like to see all the petty and smug expressions replaced with looks of abject horror as they realize they’re going to die … JUST … LIKE … LISA, but much faster. Of course, this story arc would appear only on the weekends so we could enjoy the main characters’ demise in four colors.” –trey le parc

“I like how the new [Gil Thorp] artist has quickly picked up on how the characters’ facial features tend to slide in random directions from panel to panel. Poor Mimi in panel two looks like a manufacturing mishap at an inflatable sex doll factory.” –Trilobite

“It’s a good thing ‘the Mooch Man’ is content with singlehood, because anyone who goes around calling himself ‘the Mooch Man’ has no hope of ever marrying. Or dating. Or having pity sex.” –TheDiva

“I see Mary has learned post-Aldomania that her meddle-to-murder turnover was taking just too damn long the old way, so now she’s hassling people already on their deathbeds.” –Hawkeye

“It looks as if Swiss Guy has his eyes closed, which may account for his bad marksmanship. I’m not much of a shooter, myself, but keeping one’s eyes open seems key. Contrast that with the zombie-like stares of the ladies. They won’t miss, I assure you.” –nancois

“My point is, I think if I were a masked superhero protecting my secret identity’s wife from a villain, I wouldn’t call her by her nickname in front of him and then stuff money in his mouth. I’d say something like ‘STAND BACK MA’AM’ and then … use … my … powers … you know, this scenario just doesn’t fit Spider-Man at all. Never mind.” –kostia

We must also give a big thanks to everyone who put a bit of scratch in my tip jar this week! And, of course, we give big thanks to our advertisers:

To find out more about advertising on this site, click here. And hey, did you know that the coveted top spot is available? Guarantee yourself a slot at the top of the left-hand nav bar by clicking here!