Gil Thorp is wading into the controversial topic of illegal immigration in typically baffling style. I’m not quite sure what Whitey McButtchin is getting at. Is our avuncular Rotarian saying that immigrants should follow Vargas’s legal path to US residency? That the 1986 amnesty allowed Armando and other illegal immigrants from his generation to become integrated members of U.S. society? That the Rotary Club should be given control of America’s borders? Whatever it is, Gil looks pissed, possibly because the mention of a Spanish surname prompted unsolicited commentary on immigration policy from his seatmate, but more likely because he’s bored and hungry. “Oh yeah, this is why I don’t take an interest in my students’ lives,” he reminds himself.

Snuffy Smith today also ventures into political territory, with the Patriot Act and other domestic spying programs finally proving too much for the backwoods libertarian. His anger is largely academic, as his proud decision to live “off the grid” in Hootin’ Holler largely shields him from the prying high-tech eyes of the NSA; this is a strategy that already has served him well in his long-standing attempts to avoid paying excise tax to the revenuers on his corn likker. The parson, however, casts his gaze upwards and subtly reminds him of Yahweh, the Ultimate Spy, whose omniscience takes in all of our deeds and even thoughts; this causes Snuffy’s hat to vibrate in a righteous fear of the LORD.

My guess is that Lu Ann’s smirk in panel three indicates her joy in hearing about people who are even dumber than she is. But it could just be some kind of facial spasm caused by the aftereffects of the brain damage. 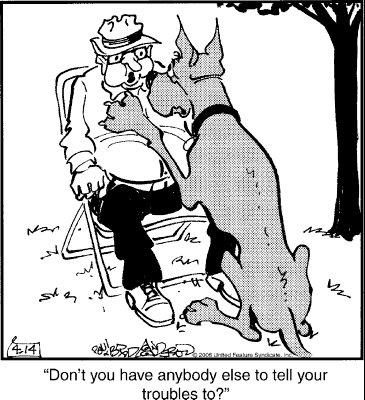 Marmaduke allowed himself a brief moment of introspection and even remorse before he began devouring the old man in earnest.