We all knew that the new Gil Thorp artist would face his first really tough test when forced to draw three disconnected panels of insane sports action, and I’m proud to say that he’s passed with flying colors. In panel one, power pitcher Lisa Wyche rotates her arm 360 degrees in its socket to deliver a throw behind the batter’s back to her catcher, six feet away; in panel two, Branden’s double is only a fraction of a second away from shattering the left fielder’s eye socket; and in panel three, Branden combines a slide with a ballerina’s split in an attempt to avoid a vicious karate chop from the third basewoman. All in all, it’s quite a respectable outing for fans of deranged softball-like hallucinations, which I trust all of you are. 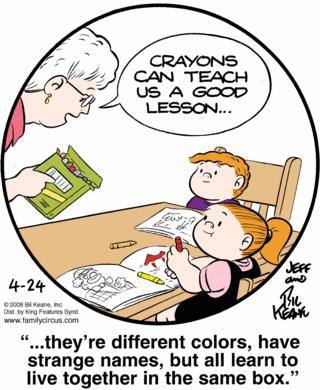 “Also, powerful forces beyond your control will use you for their own ends, constantly rubbing you down until you’re a worn-out nub, and then will throw you in the trash. So, what I’m trying to say is, somebody go get grandma some more gin.”