Many have pointed out that today’s patented forced FOOBish pun is extra forced, considering that Warren pilots aircraft that don’t have wings. But it actually led me to contemplate the origin of the turn of phrase. After all, it originally referred to a performer in a play, waiting offstage for their moment to come on; though we’re meant to think that every fictional character has a rich backstory when we don’t see them, the truth is that they really only exist when they’re on stage. Perhaps, like the title characters in Rosencrantz and Guildenstern Are Dead, Warren is beginning to dimly realize that he’s just a ancillary character in somebody else’s story, that he exists only to reinforce the Inexplicable Irresistibility Of Liz, and that once he leaves he really will be doing nothing but waiting just off stage until he’s necessary for the story again. The fact that this strip seems to be his valedictory makes things all the more poignant: he knows, at some level, that he’s going to walk off panel and vanish into the narrative ether.

In other news, Warren’s facial expression in panel one is priceless. “Is … is she getting off on rubbing her face on my upper arm? What a weirdo! Gah, let go, woman!”

“Also, watch out for the horrifying, mutated alien cow-things. Do they eat human flesh? Who knows?” 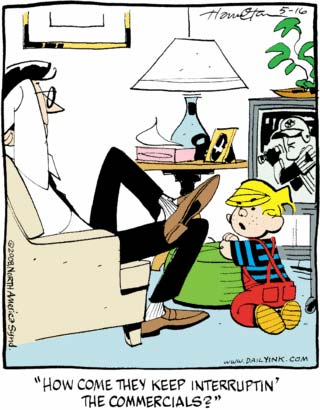 Dennis is a terrorist and/or communist?