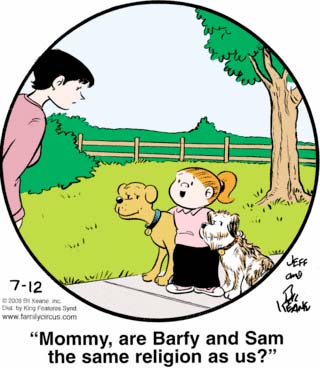 Since the America-hating ACLU prevents the Keane kids from forcibly saving the souls of their classmates during school hours, and no other children voluntarily spend time with them outside of the classroom, they’re left with only one target for their relentless soul-saving agenda: their pets. While their attempts to wash away the sins of their demon-spawn cat went horribly awry, Dolly is thinking that they might have better luck with the dogs. I urge Barfy and Sam to surrender their lives to Christ with a minimum of resistance, as the Keanes’ exorcism techniques have been known to destroy the body in order to save the soul.

(Speaking of the Family Circus, thanks to the many, many readers who sent me a link to this fabulous panel from the ’80s, in which Ma Keane imagines Dolly being hunted for sport.)

I admit to being strangely unmoved by the current Mark Trail storyline, despite the fact that it consists almost entirely of Kelly Welly being foolish again. But the prospect of a joint moose/megabeaver attack on Kelly’s hapless assistant, who will scream for help while Kelly snaps gruesome photo after gruesome photo for her new When Animals Kill column, does perk my interest up a bit. Don’t disappoint me, forest beasts! Do your worst!

I was moved to break my long silence on Cleats by the installment in which the genial children’s strip suddenly took a page from a nightmarish Harlan Ellison story. I assumed, naturally, that it couldn’t get any worse and I could get back to ignoring it, but that was before the hungry, sinister carrion eaters arrived, determined to begin picking the flesh off the still-living soccer ball as it lies roasting in the hot sun.