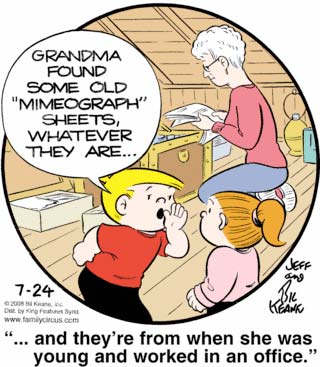 They say that smell is strongly associated with memories, and when she got just the faintest whiff of mimeographic fluid from the papers she kept in the chest, suddenly she was twenty-one years old again, and working as an assistant in that downtown office. There weren’t many women in business jobs in those days, but her boss, Mr. Franklin, seemed to take her opinions about things seriously. They spent a lot of time in his office, talking about sales strategies and advertising, and somehow she barely even noticed it when it became something more — something much more — than just a business relationship.

He told her he’d make her part owner of the company, told her that they’d travel around the world together, to London and Buenos Aires and China — but in the end, she couldn’t see herself living that life. Despite so badly wanting to say yes, she turned in her resignation, and Mr. Franklin accepted it, looking like a broken man. She married that boring but reliable boy from her high school class, the one that she knew would be a good provider, and would help her raise children, and grandchildren … grandchildren … moronic, melonheaded grandchildren … Jesus, what were they rambling on about over there? If she heard one more basic piece of English vocabulary mangled by one of those little genetic rejects, she swore she’d take a belt to them … anyway, the mimeograph sheets were nothing important. Some reports, about what she couldn’t even remember — they were just what she happened to be holding when she walked away from Mr. Franklin for the last time. She put them back in the box, carefully, knowing that she would inevitably come back to them again.

“Whatever they are”? Christ, usually the oldest one at least could muster something close to a pun at least. She imagined that nobody in Buenos Aires had even heard of “Ida Know” or, God help her, “Not Me.”

“Josh,” people ask me, “what keeps you reading comics that you obviously don’t like, day after day, for your entire life?” Well, sometimes you have to seize on to small bits of hope, no matter how unlikely they seem. For instance, I know that every day when I turn to Crankshaft, I’m probably going to see pettiness and anger and mean-spiritedness and quiet despair. But now I can say to myself, “Hey, maybe today’s the day when Crankshaft’s horrible yuppie neighbor is finally going to go on that killing spree with his hedge clipper.”

This is Momma. The title character’s interaction with her children will make you profoundly uncomfortable. It’s a real comic strip, that runs in the newspaper, where everyone can see it!