I can’t tell if Lois’s facial expression in panel two is meant to indicate that she just didn’t want to look at a little white spot up by the ceiling for the next five years and didn’t think Hi would take it so personally, or if she’s thinking “Wait, Hi thinks Michelangelo had a wife? Oh, you sweet summer child.” 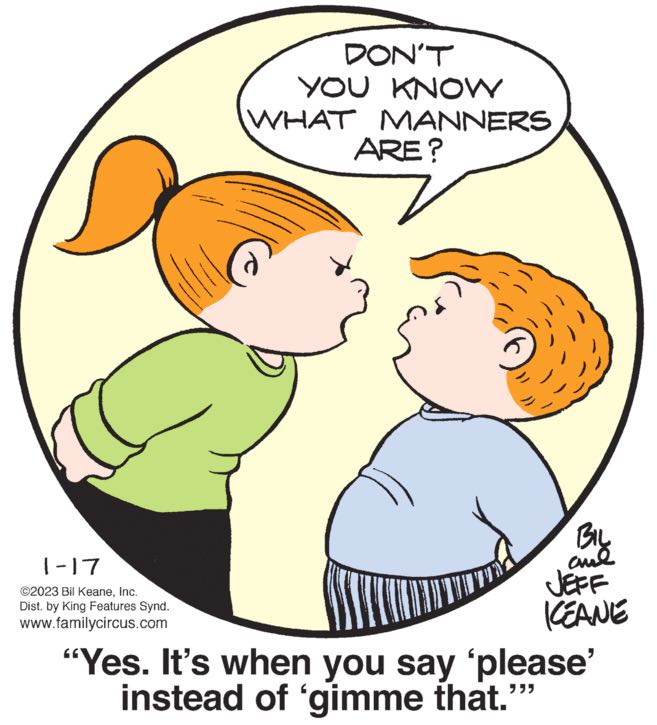 Now that Funky Winkerbean has vanished into the future, you may be wondering what happened to the Crankshaft zone of the Funkyverse, left abandoned by its parent reality in a sector of the space-time continuum that corresponds to our present day. Well, the first couple weeks of 2023 were dominated by a classic (?) Crankshaft bit involving Ed’s bus being full of glitter (??) from holiday sweaters (???), but now we’re ready to get back to a core Funkyverse concern: dumb old comic books that turn out to be incredibly valuable. I will feel genuinely irritated if Lillian here makes a visit over to Westview to sell this thing, providing an opportunity for some “special guest appearances” less than a month after Funky Winkerbean ended. At least Frasier had enough dignity to wait until its second season to do an episode with Sam Malone in it.

I’m not even going to get into the extremely long Phantom plot we’re in the middle of, except to tell you enough to set up today’s strip, which takes place in the middle of a jailbreak our hero and his Bandar friends are doing at Gravelines Prison in Rhodia. Now, Rhodia is the Rhodesia-equivalent bad guys of the Phantom post-colonial southern Africa parallel universe, and its government is spoken of in hushed tones as quite sinister, but honestly the agents of this so-called fascist state don’t really live up to their fearsome reputation. I’m particularly charmed by this guy, staring at his dead comrade and just doing a sitcomy “Arrow!? — Are you kidding me!? — Aw jeez! — Can’t believe they’re shootin’ at us with bows and arrows over here! — Who woulda thunk it!?” bit.

Today’s Crock rerun has seen its meaning completely transformed by the passage of time even as its content remains the same. When published, the joke was about how the kids don’t listen to teachers and authority figures because they’re all listening to their newfangled iPod gadgets. But today, it offers another chapter in the sad, poignant story of the Lost Patrol, who have been wandering isolated in the desert for so long that its members are still using iPods, a product Apple stopped making six years ago.