Comment of the week coming soon, but first I must post this bit of amazing comics detective work from faithful reader Patrick of the Interlibrary Loan Division:

I’m an artist with a day job at a public library. One day I was repairing a microfilm reader printer and was making test copies using a September 1952 Lexington (KY) Herald. Because I read CC, I gravitated towards the comics and lo and behold, there is the very same Mr. Dithers looking for Dagwood in the bathroom and finding him hanging out the window with the towel draped the same way as in the colour 2008 version snarked on at CC.

There is a part of me that sort of likes Blondie as a legacy strip but at the same time, the 1952 and 2008 strips are exactly what’s wrong with the state of comics today. In any case, I thought you might find the strip useful for comparison’s sake.

I offer the two strips together here for you to take a look at. The more artistically skilled than I can figure out how much of the actual art has been copied along with the joke.

Note that the more expansive comics format in days of yore allowed for an extra panel, in which Mr. Dithers angrily brandishes Dagwood’s pants, and which to my mind is the funniest bit in the whole strip. One is also left to wonder what difference in nuance separates 1952’s “SO?” from 2008’s “SO!!!” The whole thing does really lead me to wonder how often legacy strips with huge archives simply recycle gags wholesale every decade or so.

Also! Do not forget that I am going to be on Jeopardy! tomorrow (July 22)! The show is syndicated, so (God, it’s fun saying this) check your local listings. (UPDATE: Apparently in some markets Jeopardy is broadcast twice in one day — but one of the shows is a repeat. Be sure you’re watching the right one!) I’ll be the dork who looks like this: 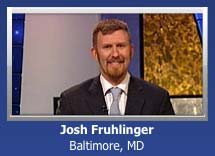 On this point, a humble request. Are there any techno-studs or -studettes out there who have a digital video recording setup situation that will allow you to easily (and I must emphasize easily — I don’t want anyone putting themselves out on this score) record the show and put it in a format that I can save digitally forever (DVD, MPEG, whatever)? Please email me if so! (UPDATE: I have got a flood of responses on this point, so no need for further e-mailin’. Thanks to all!)

And finally, what you’ve all been waiting for: the comment of the week!

“Today’s Crankshaft reprises Tom Batiuk’s tried-and-true Last Sex Ever Ever formula. Soon Pam will die. These strips are like slasher films, only without the hot teenagers.” –Uncle Lumpy

“Man, any time Cathy does anything, she throws her arm back like she’s in the damn Torch Song Trilogy. I wish I could get that down, as it adds much needed flair. But I’d just fuck up my rotator cuff, probably.” –Jetsam

“I’m not very comfortable with the door Pluggers is opening with the introduction of the ‘You’re a plugger if your (blank) doubles as a/n (blank)’ motif. Sure, it’ll be harmless enough for a while; just a little ‘spatula’ and ‘fly-swatter’ here and a bit of ‘trash can’ and ‘fireplace’ there, but I think we all know where this is leading.” –Violet

“Incidentally, if I were given a vote, I’d vote Sally get a new hairstyle before a new kid.” –Farley’s Revenge

“Perhaps, Eric, thinking the connection is lousy, is shouting into the phone but, in reality, his voice is coming through quite fine. So Margo has to hold the phone that far away in order to not damage her hearing, which, as a predator animal, is exquisitely sensitive.” –DAS

“Sigh … I remember the day that my husband screamed his proposal to me over a cell phone.” –Rachel211

“Margo’s not vibrating because of the shouted proposal, she’s just now realizing that she is dressed exactly like Brady Bunch housekeeper Alice. Will Eric be her Sam the Butcher? Only time will tell. (For those of you who are impatient, the answer is no.)” –Pantsless Irving

“I’m not sure what kind of face I’d make if someone screeched a proposal at me over the phone, but I’m fairly certain it wouldn’t be the face of deep, soul-crushing ennui. ‘Honeymoon, shmoneymoon … life is a meaningless game, Eric.'” –Al Ewing

“So, what is that ‘animal’ in MT anyway? Today it sort of looks like a bucking bronco in panel one but then it morphs back to a moose in panel three. A moose? A horse? A moorse?” –Flying Ace

“All the name-dropping suggests to me that Ray Billingsley is not really following an anti-Pixar stance, but is indulging in his love for the quotation mark.” –Lake Eerie

“That panel from Mary Worth reminds me of the ‘good citizenship’ posters they used to plaster all over my junior high and which made me resolve to turn into a dope-smoking fiend as soon as I could find some friends with weed.” –cheech wizard

No matter whether I win or lose tomorrow on Jeopardy, it’s the tip-jar-money-putter-inners who are the real winners! And our advertisers are almost as awesome: