You might be tempted to think that the current Judge Parker storyline has a certain political point of view based on current events, what with the antagonist incumbent mayor demanding his aides go mask free and lashing out against bad poll numbers. But you have to admit that he really is a victim of a “deep state” conspiracy, in which entrenched, corrupt officials and the town’s out-of-touch elite are working in concert to bring him down and replace him with their preferred puppet candidate!

The Phantom Empire is an old serial from the ’30s that has an extremely bonkers plot, starting off as a Western starring Gene Autry as, basically, himself, and somehow ending up deep under the earth’s surface battling a super-advanced civilization from the lost continent of Mu (“The idea for the plot came to writer Wallace MacDonald when he was under gas having a tooth extracted“). The important thing here though is that it’s not part of the Star Trek mythos, nor does it star Leonard Nimoy (understandable, as he was only four years old when the serial was made), so, uh, does anyone know what Pam’s talking about? I’m not sure what Pam’s talking about.

Dagwood smugly shitting on the young is nothing new in this strip, so let’s just take a moment to appreciate how much chutzpah it takes to shit on the young while you lounge around the house wearing loafers and a mustard-colored polo shirt tucked into khaki cargo shorts, with a black belt really bringing the outfit together.

Am I sad that we’re not finding out what’s happening with Jeremy Cartwright? You bet. But is the vision of a man half-heartedly tossing a cat (?) into the middle of a dirt road and saying “Sorry about this… Good luck!” the absolute funniest thing you or I or anyone else will see this year? Yes. Absolutely yes.

Look, I’m not going to complain about Blondie doing a toilet paper shortage joke now even though the toilet paper shortage that marked the early pandemic has largely abated; I understand long syndicate lead times and such. I’m not even going to gripe about Blondie half-assing it when it comes to coronavirus jokes in general, doing strips that clearly reference the pandemic without fully integrating it into the characters’ world. It’s fine, really! You want to do some topical jokes but also don’t want to upend everything about how you do the strip! It’s really OK! What I do have a problem with is how today’s strip, in which the Bumstead family is so obviously overjoyed at Blondie’s shopping find, has forced me to contemplate everyone’s almost certainly poo-encrusted buttholes. Look at how excited Daisy is! What horrors has she seen?

Uhhh, it looks like the the abrupt end to James Allen’s time as Mark Trail’s writer/artist has resulted in the abrupt … suspension? … of the Jeremy Cartwright storyline four weeks later, with a sudden jump into an Elrod-era story of animal abandonment. Normally I love a good animal rescue story, of course, but still: did Jeremy ever get that drink or what???

“In a way, by helping Madi, she’s helping us again as well, since we won’t have to help Madi. We can enjoy ourselves here, far from Madi, until … when did her dad say he was getting back from Venezuela again? September?” 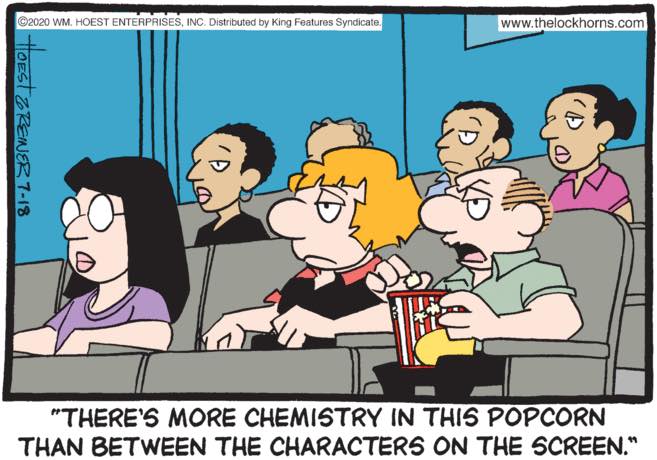