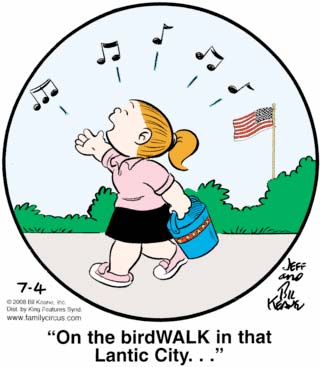 232 years ago today, the leaders of the British colonies on the east coast of the American continent took a fateful step, authorizing a Declaration of Independence that would make their fractious home states into a new nation. If the corpses of the men who had been present that day in Philadelphia were revived through some sort of voodoo magic, what would they think of the country they had made? If “pleasure” was an emotion that could penetrate into their monstrous undead souls, they would probably be pleased that their descendants were spending the day goofing off from work, eating huge quantities of meat, and firing off weapons-grade munitions (or, in some places, actual weapons).

But if their mouldering, skeletal fingers were to turn to the funny pages, their empty eye sockets would come to rest on today’s Family Circus, and then their rotting, unbeating hearts would be filled with the one feeling we all know to be possible for zombies: rage. Because the flag is there, and the notes are there, but shouldn’t Dolly be adorably mangling our national anthem (“And the rock heads will blare/ The mom’s purse strings are there”) or some other patriotic ditty (“For space and skies/ For Pam’s full plate of grain”), and not some pestilent tune about picking up male prostitutes on the Jersey seashore or whatever the hell it is she’s singing? What I’m trying to say is, if you see a shuffling mob of undead patriots in moldy powdered wigs attempting to eat the brains of the degenerates who currently live in the country they started, don’t come crying to me.

I suppose Gabriella is fainting because, as an ethnic, she’s tuned into the spirit world and can thus detect the ghostly/demonic presence that lingers over Lu Ann’s paintings. But I’m hoping that she stumbled on to Alan’s stash.