Having apparently decided that his nonstop regimen of bingeing and (I assume, based on his rail-thin physique) purging isn’t punishment enough for his poor body, Dagwood has now taken to torturing his innocent bladder.

Truth in labeling laws ought to require that every single installment of Crankshaft and Funky Winkerbean contain the phrase “an undercurrent of melancholy that I can’t quite seem to put into words.” 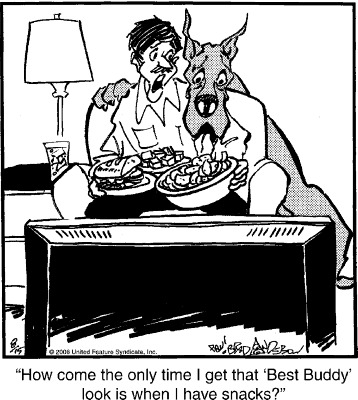 Marmaduke is overplaying his hand here: his owner has made the baffling decision to try to balance a good-sized sandwich on a plate, a bowl of potato chips, and, um, a plate of some sort of cube-things on his lap with no tray or other support of any kind, so at least half of that food is going to be on the floor in short order.

Ha ha! Momma’s doctor is a monstrous cannibalistic fiend who feasts on the organs of the elderly.

In unrelated news, for everyone who has been able to endure the Foob Wedding Of The Century by consoling themselves that once the vows have been uttered, it will all be over: Ha ha ha ha ha.