Hey everybody, it’s the wee hours of Tuesday morning, so it’s COTW time! But first, as is becoming more and more common, it’s adorable merch picture time. Both of today’s pics come from the future Mrs. Spectacular Spider-Brick, who here is modeling the one of the fine t-shirts bearing the CLAM DOWN logo designed by her beau: 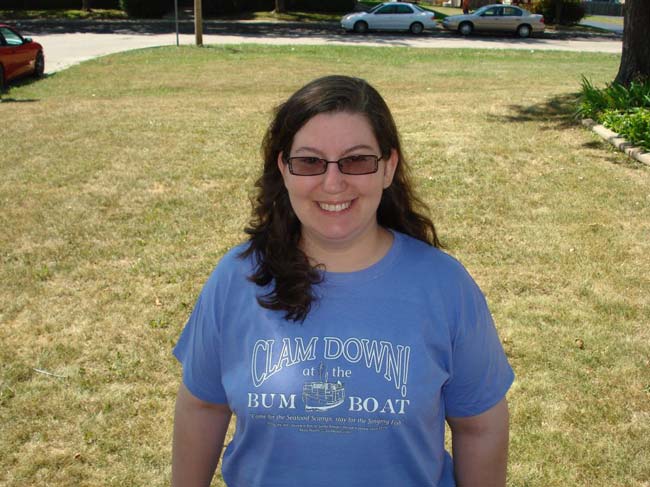 And her kitty loves the logo almost as much in its mousepad form! 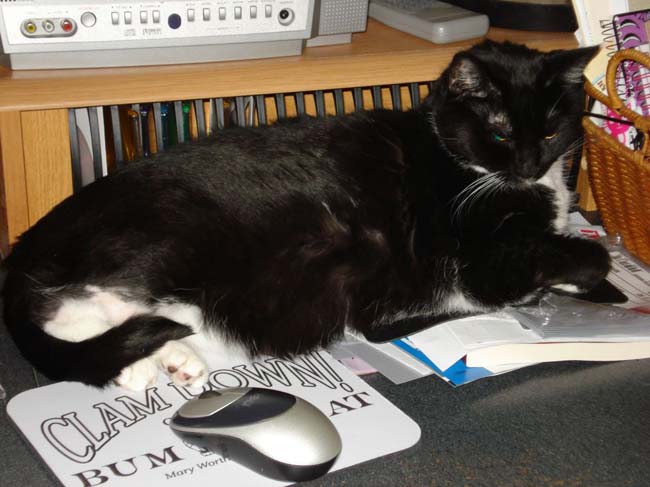 Also! There are two comics blogs that I have been meaning to link to for about ever:

“Alan’s deep into drug addiction now. Shirt open at the collar, no undershirt seen, and it looks like his cuffs are unbuttoned. Next thing you know, he’ll stop wearing a belt, and maybe let his pants cuffs down an inch. This raw depravity gives me the vapors.” –Muffaroo M. Muffaroo

And the runners-up! So funny!

“Today’s FBOFW would look good on a Hallmark card that had been set on fire and flung into a sewer.” –Angry Kem

“To get pregnant, [Elizabeth] would have had to had contact with Anthony’s junk, which, henceforth, we shall refer to as ‘Little Anthony and the Imperials.'” –Old School Allie Cat

“I can’t wait for the inevitable three-year story arc when Toby and Chinbeard get to Scotland and she’s run over by an oncoming glacier. ‘That ice! It seems to be getting closer. Should I move?'” –Mr. Coffee Nerves

“Toby often uses her credit card to cut up lines of coke, but usually spends cash on her main purchases. Namely, coke.” –Rusty

“I love the confusion on Toby’s face when the bank asks her ‘Did you move to Canada?’ Clearly she doesn’t know. Perhaps she did. How can one tell? Where is Canada? Toby’s mind is on overdrive.” –Gabacho

“There’s something about that ellipsis and subsequent horrified triple exclamation mark in Margo’s speech bubble that suggests very strongly that if she, personally, happened to get any Lu Ann on her hands she would scrub them with a strong disinfectant.” –One-eyed Wolfdog

“When our A3G narrator says the sunshine ‘restores Margo’s spirits,’ what he/she/it means is that, of course, liquor stores are usually only open during daylight hours.” –Nate

“Today’s installment of Luann maintains such a precise balance of ‘huh?’ and ‘eww!’ that it’s almost a thing of beauty, except for being dreadful beyond human expression.” –Violet

“Was Dennis menacing? If he whipped it out on the diving board and started doing an ‘out of control firehose’ on the people below, I have to give him a bit of credit — perhaps even a standing ovation for something finally ‘menacing’ after all these years of milquetoasty bits of annoyance. However, I’m betting that he probably simply stood up on the high board, shaking with fear and a miserable look on his face, with a stream of urine running down his leg as some bigger kids lined up on the ladder behind him kept taunting him to jump.” –Frank Parsnip

“I also like that pluggers buy magazines to look at the pictures, thereby subtly, hilariously subverting one of the oldest jokes about illiteracy. Books can’t be found within fifteen miles of this conversation.” –ChargeMan

“I think the duck looks a little irritated with Slylock. Maybe he suspects the way the thief gets across the water is because the thief is a duck. ‘It’s like he doesn’t even see that I’m here,’ he’s thinking. ‘Howabout the next thief steals chickens from a henhouse — how would he like that?'” –Shmork

“Take the wheel, Jeff, I need to gesticulate.” –Red Greenback

“A3G has such nice, polite, well-groomed dope fiends. I can only assume their drug of choice is Flintstones chewables.” –Joe Blevins

Also worthy of honorable mention (though far too long to reproduce here in its entirety) is faithful reader Gold-Digging Nanny’s meticulous reconstruction of the last few months of Apartment 3-G storylines, with damning analysis of how they have almost universally failed to live up to their potential.

Speaking of honor, those who put cash in my tip jar are particularly honorable! And so too are our advertisers: