Hey everyone! The incredibly long long boring long non-exciting long story of Elmer appears to have finally ended, with Elmer getting to stay in America because he has a new job doing bilingual outreach for the Kalamazoo Kings, even though it was repeatedly established that Elmer is entirely monolingual. But whatever! Don’t question it, or they’ll drag him back and try to explain away his happy ending some more.

Anyway, it’s September, which means it’s football season, which means that we get to see Matt Rogers and Jeff Ponczak head off to Central City to get a “football physical”, for some reason. Matt and Jeff (which sounds just like Mutt and Jeff — one’s short and one’s tall, get it) are a couple of nattily dressed buds who are no doubt destined to be this strip’s most lovable pair of totally platonic dude friends since Bill Ritter and Stormy Hicks. I’m sure there will be delightful antics, with more hilarious malapropisms from the Widow Ponczak, the batty Bratislavan! 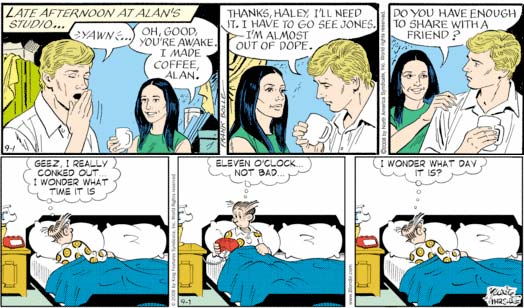 Since the harrowing real-life effects of drug abuse — the violence, the terrible mood swings, the neglect for hygiene and the resulting oozing open sores — are considered too intense to depict on the comics page, there’s only one way left to depict Alan as the desperate addict we all know he is: by establishing via a narration box and dialog that he was asleep in the middle of the afternoon! Damn you, demon dope! (Of course, we can’t actually show him sleeping, as that would be simply too shocking.)

Anyway, this is a roundabout way of saying that I think Dagwood has been a junkie for quite a while now.

I was going to make fun of Gasoline Alley for taking a day off, but then I realized that the chain link fence depicted here has had more work put into it than a week’s worth of this strip’s usual hillbilly antics.

You know, if you’ve gotta repeat a joke every four months or so, pluggers ain’t gonna hold it against you or nothin’.