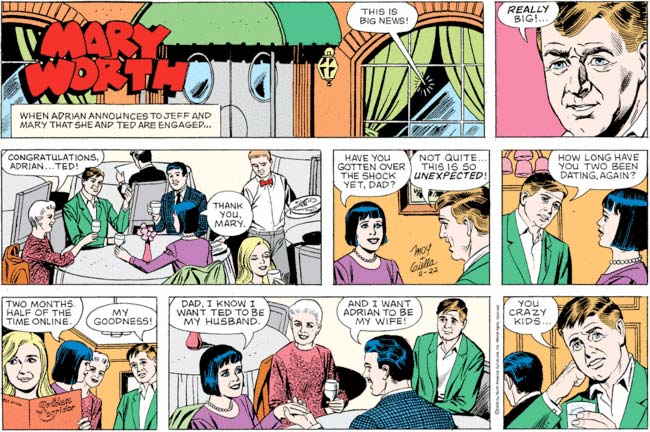 As if the sad outcome of all this weren’t being telegraphed obviously enough, we now have the “getting engaged far too soon” revelation, which surely presages disaster. But I’d like to pause for a moment to savor the sentence “Two months, half of the time online.” I don’t think anyone who met on a Web site dedicated to matchmaking (Match.com, Yahoo! Personals, Manhunt, etc.) would consider the pre-meeting exchange of information to constitute “dating”; obviously Ted and Adrian first encountered each other in some specialized online community (the Marcus Welby, M.D. fan boards, say, or pencilmoustachecare.com). Their love grew over a series of weeks in anguished discussion board posts, e-mails, and emoticon-laden chat sessions before one of them finally was able to fly across the country to meet the other in the flesh for the first time. Thus, Dr. Jeff is punching himself in the final panel not because he’s posing for his yearbook photo, but because he’s hoping the pain can distract him from the intrusive image of his daughter and some dude who looks like the Cary Grant’s romantic rival in some forgotten 1940s romantic comedy IMing each other while masturbating furiously. 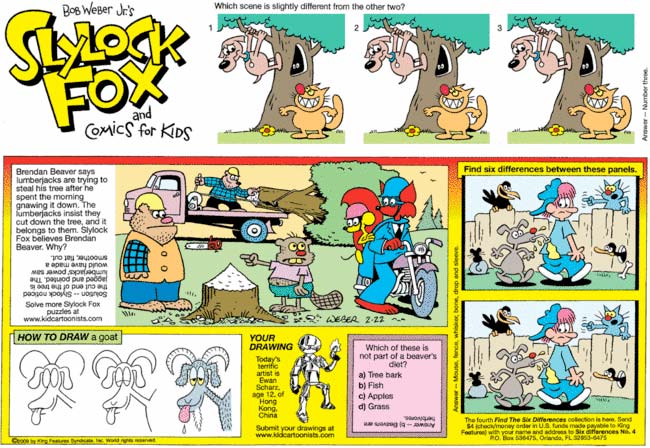 ANSWER: The lumberjacks may be bear-like things, but they drive a truck, operate power tools, work for a multinational timber-harvesting corporation, and otherwise participate in modern capitalist society. Brendan, meanwhile, is just an animal that lives in the forest and bites trees until they fall down. He has no property rights. I don’t care if he’s wearing a pink t-shirt.