Hey everybody! I need to begin this post by offering an ENORMOUS thanks to everyone who put money in my tip jar during the Spring Pledge Drive. I appreciate the warm fuzzy feeling, and the cash really does help me justify dedicating my time to this site instead of boring, lucrative work. Everyone will be getting individual thankses in over the next couple of days, but I wanted to give a collective thanks first.

And we should all collectively thank Uncle Lumpy for his admirable fill-in blogging and hilarious fund-raising-banner-creating. Those of you who are long-time readers can tell the tales of woe and horror from the days when I’d go on vacation and the site would not update for days and days! Uncle Lumpy spares us that nightmare and brings his own wonderful sense of humor in the process.

Now, some of you may be thinking there there is really no such person as “Uncle Lumpy,” that he’s just an alternate personality my subconscious mind has created because I’m shy about asking for money. And to tell the truth, up until this past week I hadn’t ever met him in person, so theoretically this could have been the case! But when I was vacationing in [undisclosed location], he and I met for lunch, and after a (small amount of) wheedling on my part, he agreed to let me post the pic of that momentous occasion here: 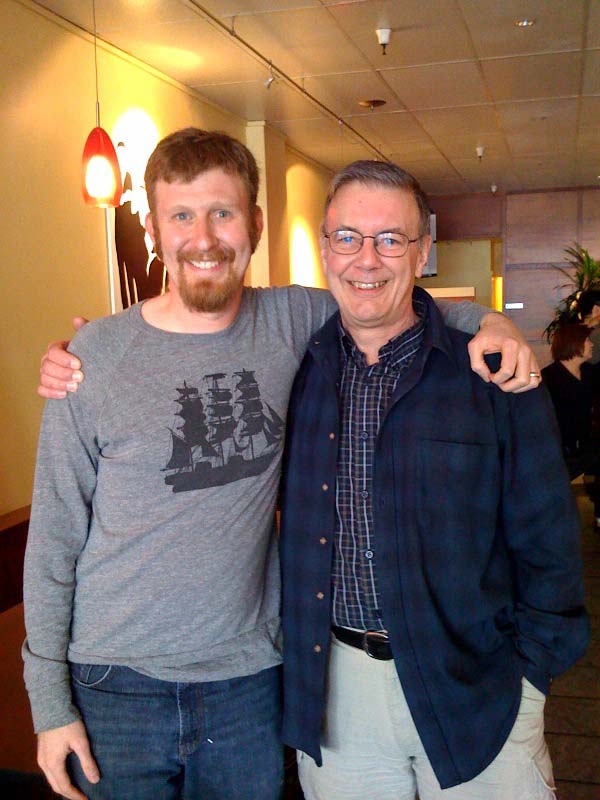 He is, as you might have guessed, a charming guy, and he even has good taste in lunch spots.

Meanwhile, in totally unrelated news, faithful readers (and crack father-daughter team) Doug and Miranda pointed out something disturbing about the current Mark Trail storyline. Check out these panels from the March 16 and April 3 strips:

You’ll note that Mark and Cherry have switched places in the photograph! This can only mean one thing: Rusty can control time and space with his mind. Hopefully he will realize the true extent of his power before the moronic villains beat him up.

And that makes for a perfect transition to the comment of the week!

“My name is Rusty Trail. You took my camera in exchange for $500. Prepare to kick my ass.” –Artist formerly known as Ben

And of course the runners up are also hilarious:

9CL: “This is turning into Rock of Love, only with ballerinas instead of skanks….no, wait…” –kalki

“In the land of Funky Winkerbean, Les Moore is considered prime husband material. As if the strip wasn’t depressing enough.” –NoahSnark

“Just try this simple test. Let’s say this woman is the mother-in-law of Edda from 9 Chickweed Lane. Have her hit Edda with a frying pan. Snrk. Not funny at all, was it? Go on, hit her again. Again. You see? It’s actually sort of tragic, seeing Edda in a crumpled heap on the ground like that. Wait, one more time. Okay, now it’s kind of funny, but it took four times to do it. One more, and we’ll stop, I promise.” –Muffaroo

“I’m pretty sure that the two criminals have recently swapped shirts. This is probably their way of throwing people off. Sadly, this is their best idea so far.” –Digger

“‘Ted is NOT an honest guy!’ Yeah, we know. Our first clue was when he claimed he found Adrian attractive.” –AmazingThor

“That must be Joe. He’ll be upset when he learns the kids aren’t here … but he’ll be okay once he knows I sent them home with that nice man in the van. The guy had videogames and candy! CANDY!” –Patrick

“When Alexander of Macedon was 33, he cried salt tears because there were no more worlds to conquer. Rocky Ledge is only 27!” –One-eyed Wolfdog

“The sexy picture of Adrian on the ad is making me question my sexual orientation. I think I’m going to have to come out as a dopesbian.” –Melissa G

“Out in South Dakota, LuAnn tries to milk a cow and is kicked in the head, resulting in a 20-point increase in her IQ.” –gnome de blog

“I am shocked that they would even consider eating bread products, even on vacation. That would be a crumby thing to do. Why, I would feel like a heel if I spent any dough on bread, or any bread on dough for that matter. Also, when I got home, I would be toast. I would Wonder why I did it. Wait, aren’t you SUPPOSED to loaf on vacation?” –The Restless Mouse

“‘Madea Meets Blacula’ — funny. ‘Hysterical Girl Tasered’ — funny. How did this happen?? Or is it just one of those a million monkeys at a million typewriters sort of things?” –Liner Notes Danny

“This was a full day’s work for Randy. Now it’s off to brunch where a bunch of square-jawed white guys will congratulate him for his gutsy handling of his single bail-hearing and big-breasted women jut at him approvingly.” –Mischief Maker

“See, the problem is, Tommie, we can’t really tell if he’s shaking you, or if you’re just moderately surprised. You’re the girl who bobbled ‘wolf!'” –commodorejohn

I will continue and forever thank those who put money in my tip jar! And our advertisers also deserve thanks: