Your comments of the week momentarily, but first, a few items to amuse you! Occasionally, people all across America find horrifying things in their closets, like Ziggy posters. In times gone by, they probably would have just burned them in the dead of night, but now they mail them to me instead. Take, for instance, this gem from faithful reader firebus, who did in fact find it in his closet (he claims to “only have a very vague idea of how it got there”): 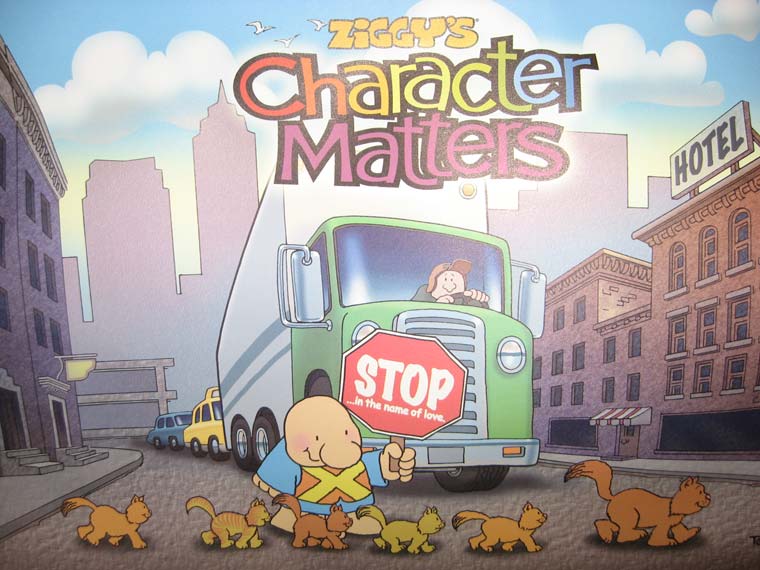 While the content of the cartoon portion of this image is not worthy of much comment (though I am not entirely pleased by the addition of “…in the name of love” to Ziggy’s STOP sign), I admit to being fascinated/puzzled/angered by the caption/title/whatever at the top of the thing, “Ziggy’s® Character Matters.” Are we to understand that it’s Ziggy’s character that matters, or that Ziggy has laid claimed to the phrase, and the concept that underlies it? Was there a whole series of “Character Matters” posters, each of which took a controversial stand like this one, which dares to say that those of good character would not allow adorable kittens to be run over by a truck? Did the Ziggy juggernaut’s failure to trademark the “Character Matters” phrase result in a sad plethora of political candidates deploying it as their campaign slogans?

Anyway, after spending some time contemplating all this, I burned it in the dead of night.

Also! Thanks to faithful reader name in the comments who linked to this awesome story about the filming of the Marmaduke movie in Vancouver. Seems the auteurs behind this film (already being spoken of as “The Citizen Kane of cartoon dog movies”) set up a kennel for their animal actors near some pricey condos, whose residents did not appreciate the constant barking, and who quickly discovered that the film crew had not secured any sort of permit. There was no talk of anybody being devoured by the canines, which says to me that this will be yet another film that shies away from the raw intensity of its source material.

Finally, here is a thing I wrote, about how sometimes the workplace doesn’t have to be a living hell! Perhaps you will enjoy it?

And now, ladies and gents, your comment of the week!

“Wait, Margo only noticed cows in the street from her hotel room window? How did she get to the hotel without seeing them? By transporter beam? Blindfolded? Being so completely self-absorbed that she was oblivious to the world around her? Oh, okay.” –BRWombat

“A great day for Trail, as we begin with a view of their hive home. Then, we move to a preview of what it’s like to kiss Mark. Finally, we see Mark’s great reaction: ‘She’s attacking me with her face!'” –migellito

“Isn’t that the guy from Monopoly, without his hat? The recession hit him surprisingly hard.” –Jaime Weinman

“The best we can say for Margo’s turquoise turtleneck is that it is alliterative.” –Fashion Police

“Re: Mark and Cherry’s liplock: there is a direct correlation between ‘how unsexy a kiss is’ and ‘how long a conversation you can hold while performing said kiss.'” –Francis

“I’m worried about what will happen to Carpool Denizen #3 if Archie can’t get that car started and Jughead uses up all his cellphone minutes trading lame banter with Rich Uncle Pennybags. They’ll have to eat … and soon. Jughead’s appetite is, as we all know, enormous. ‘Okay, to make it fair, we won’t eat anybody who has his own digest-sized comic available at supermarket checkout lines everywhere! Oh, sorry, new guy … you lose again. Maybe you shoulda tried wearing a funny hat or having a catchprase or something.'” –Joe Blevins

“Luann: In keeping with federal law, Quill the Australian is required to say ‘fair dinkum’ at least once while he appears in the comic strip. Furthermore, Evans is required to include the term ‘G’Day’ to avoid a hefty fine. Source: Foster’s Unlimited Comic Koalas Act of 1987.” –Harry Pothead

“Mark and Cherry spend an intimate moment with Cherry attempting a kiss, and Mark stubbornly maintains his ‘romantic grimace.’ They are then crushed to death by the flopping of a monstrous fish. I think they would have wanted to go out that way.” –sak

“I think all comic strips should adopt today’s Judge Parker format of having the punchline be ‘Surprise! We’ve used a giant hydraulic press to flatten your face into a giant rectangle!’ I’d pay to see that happen in Dennis The Menace.” –Kibo

“I don’t buy this ‘reformed’ shtick of Weirdley’s at all. He’s probably just a ghost that has taken his form. He took Slylock and Max back to the very first Christmas to show them what the holiday spirit is truly about. When that plesiosaur gave his favorite icthyosaur to the tyrannosaur, it changed Slylock forever. He vowed to stop being so greedy and payed for Miniscule Max’s ADD treatment in full. Either that, or Weirdly is trying to set up some ridiculous alibi for when he’ll attempt to steal an orange from a fruit stand. It’s possible that this will also involve ghosts.” –It’s time to pay the price

“I think Count Weirdley’s time travel experiment has disrupted the timeline. When the trio return to the 21st century, they will find a horrible world dominated by humans instead of numerous species of talking, shoeless animals. All three freaks will eventually be killed and dissected by the authorities or angry teenage furries.” –Naked Bunny with a Whip

“I thought the text box in Slylock Fox was somehow leading up to telling us Count Weirdly was responsible for the death of the dinosaurs. ‘Weirdly insists an asteroid blocked out the sunlight, but Slylock thinks differently. What evidence is there to suggest Weirdly is lying?'” –Chromium

“The most exciting thing about this Mary Worth story line is that Mary didn’t savagely beat Delilah to death yesterday when she failed to use a coaster for her beverage.” –Sheila Sternwell

“Bumblers! Nothing can overcome my agility! Now prepare to die from my Octo-fart!” –sully

“What kind of employment do Archie and Jughead have that requires them to dig random holes? Could it be that they are actually working for the gopher?” –the good ship thetis

“I can see why Elton John might want to attach four mechanical arms to his body. Imagine his range on the piano! But why’s Spiderman after him?” –Duke of Earl Grey

“‘Endings have to be earned,’ Les says, distracting her with pithy faux-wisdom as he leans in to rip her earring off with his teeth and swallow it. I’m … not really certain I entirely understand FW any more.” –Dragon of Life

“Today’s Family Circus magnifies Billy’s growing sense of existential ennui, as he begins to question the unseen social forces that shape behavior: If our notions of how an eight-year-old ‘should’ act are nothing more than a combination of traditional inherited behavior types and social conditioning from his immediate environment, then whence comes the moral authority of society to impose these values on Billy? Who can really say what the proper way to act is for someone his age? Billy will have a long time to ponder these questions as he spends the next two weeks hunched over in the dark of the Keane house’s rat-infested crawlspace.” –Doug Wykstra

“Oh, evil Billy! You knocked over a houseplant, thereby spilling a little bit of dirt on the floor! Worse, you did it by playing! Don’t you know that boys your age should be toiling in an athletic-shoe sweatshop by now? Well, don’t worry, you’ll find out all about it soon enough.” –BigTed

“There is something deeply upsetting and altogether creepy about the look that Cayla gives Les in the last panel of today’s strip. I’m guessing that Batuik was trying to draw an expression that communicated ‘lovingly supportive and patient, yet appealingly seductive at the same time,’ but it came out more like, ‘calmly, but hungrily appraising the subject’s weight gain before harvest.'” –Alan’s Addiction

“The whole cloth diaper thing isn’t that unusual, at least with the folks I know. However, it’s usually something practiced by eco-conscious hippie types, with big concerns about the fate of humanity, etc. I wouldn’t think Marvin’s parents fit the bill, though, considering they doomed humanity when they failed to mercy-kill Marvin on his first day out of the womb.” –Jilliterate

“If I was PJ, I would be more worried about Dolly’s fat little fist, probably R rated for graphic violence.” –The Restless Mouse

“The plugger may feel stimulated after ingesting the bran flakes. But he will immediately become depressed upon realizing that his dining room table is a desk next to a refrigerator.” –survivor

“Mary’s pose in panel two was cribbed from one of those ‘hip’ late ’80s PSAs — you know, the ones that had systemically arhythmic people rapping about stuff like checking your smoke detector regularly. Delilah’s pose in the same panel was cribbed from a poster found in an orthopedic surgeon’s waiting room, entitled ‘Your Right Elbow: Things You Shouldn’t Make It Do.'” –One-eyed Wolfdog