Kids, we have a number of ITEMS! for you to get through before we reach the beloved COTW, but I think you will find them worth your while!

First off, long-time readers of this blog are well-acquainted with The Fart Party, one of my favoritist Web comics. But for everyone who’s been all like “Man, reading stuff on the Web is for suckers,” now you can get the second volume in book form! Julia Wertz chronicles her happy-go-lucky drunken cheese-oriented self-loathing, for your entertainment! Buy it now if you know what’s good for you, sucka!

Also! Faithful reader McManx draws my attention to this image, recently added to Wikipedia’s Mary Worth article, from the cover of a 1956 comic book compilation of our favorite meddling biddy’s adventures: 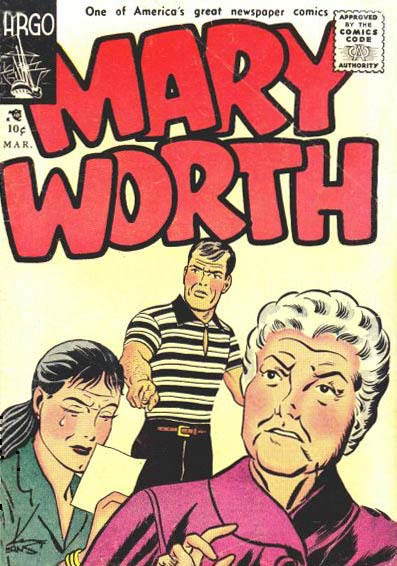 So, first, yes, Mary Worth once had its own comic book, and was identified on the cover of said book as “One of America’s great newspaper comics,” despite which obviously false claim the Comics Code Authority still deigned to grant its seal of approval. But as McManx points out, isn’t there something familiar about this scene? Angry Mary … weeping dark-haired beauty with small scrap of paper, possibly with a phone number written on it … menacing stripe-shirted figure — good lord! Could the Charley-Delilah plotline be spooling out again, decades after its origin?

Also also! Have you ever said to yourself, “I wish there were a blog that does for terrible rock lyrics what Josh’s blog does for comics?” Well, now there is, in the form of Awesomely Bad Lyrics. Go forth and enjoy!

And finally! If you would like to help a blogger who’s blogging a blogathon for the Boston Area Rape Crisis Center, check this out!

And now, after all that, your COMMENT OF THE WEEK!

“What’s going on? What was that loud noise? And why is blood coming out of the front of your shirt? Are these two events related? Oh, how I wish Andy were here to explain this to me!” –buckyswife

And the runners up! Many funny ones, this week…

“Now that I’ve looked at it again, I’m thinking that the jack-in-the-box is just to get Ziggy on his back, from where he is unable to rise without help. Help which, one prays to god, is never forthcoming.” –Muffaroo

“Doesn’t this panel prove once and for all that Ziggy IS, in fact, wearing pants? Footie pajama pants, to be precise. So, now can we please stop worrying about getting a glimpse of his pudenda? And start worrying that maybe he has the kind with a flap in the back that could suffer a wardrobe malfunction at any moment?” –Brett

“Joey, those people you are involved with are gangsters … they will ruin us and the company if you don’t stop them now! So, quick, talk to Mark Trail, who I know as a person who takes photographs and emphasizes words peculiarly!” –Chip Whittle

“Funky Winkerbean: We put the ‘GI’ in ‘turgid’!” –Uncle Lumpy

“So as each Phantom is named Walker for ‘the ghost who walks,’ then each Judge is named Parker, for ‘the sexless lawyer who parks carelessly’?” –Ed Dravecky

“Brad’s flirting reminds me of a bad joke I will re-work: Q: What’s long and hard on Brad? A: The third grade.” –Rusty

“Brad, Brad, you degenerate cad! Don’t think I can’t follow your eyeline in panel one, mister! Did you really think you’d get away with eyeing Toni’s collarbone like that? Her eyes are up here, thankyouverymuch. And her eyebrows are way up here, kind of floating in the abyss. See ’em?” –Joe Blevins

“I don’t see how anyone can resent the years-long, go-nowhere sexy banter between Brad and Toni. I can only hope it continues for decades to come, finally leaving Brad an old man on an unrumpled deathbed, ruminating on the fact that in the heady rush of all the double entendres, he forgot to have sex.” –Dan

“Mommy gives me a bath by dropping me in the water and then leaving and passing out with a bottle of wine on the couch.” –Rob

“Is it just me, or are Wolverine’s mutton chops getting muttoner and muttoner by the day?” –Roto13

“MJ, on the other hand, will be pleased to discover that sex with Logan involves actual penile penetration, as opposed to Peter’s ejaculating onto webs and, after a lengthy courtship dance, furtively inserting his seldom-depicted pedipalps into her vagina before running away, lest she eat him.” –Comrade Denny

“Isn’t that Larry King, dressed like Colonel Sanders, speaking to Margo? Is that why she looks flustered? I know I would be.” –Jumper

“To Wolverine: Sorry bub, but in this strip, shiny blue hair that shapes your face like an autobot cannot compete with Peter Parker’s gay-Elvis forelock. Chinbeards only get lovin’ in Mary Worth.” –teddytoad

“1. Protagonist is introduced. 2. Protagonist’s trivial problem is revealed. 3. Problem is blown way the hell out of proportion. 4. Anvils — a lot of anvils — are dropped on protagonist. 5. Protagonist, having seen not only stars but also good sense, obligingly dances on strings held by soulless inhuman puppetmaster. 6-29. Pastel food montage. 30. Choose one: (i) pool party, (ii) fiery death.” –One-eyed Wolfdog, on how a typical Mary Worth plot could be fit into 30 panels

“I just assumed that all characters, not only the Alzheimy ones, wanted to escape RMMD.” –Anthony

“That’s the Alzheimer’s enclosure behind us! We call it ‘Charterstone’, and nearly every one of the residents wants to escape!” –Naked Bunny With A Whip

“Is one of Wolverine’s mutant powers his utter lack of table manners? Maybe that’s why most ‘non-mutes’ shun him — no one wants to be sprayed with bits of food as he chops up his meat and stuffs it in his mouth with both hands. For MJ, of course, anything is a change for the better from Peter’s passive-aggression and prissy neuroses.” –Lawyerbob

“Peter would shoot his webbing to pick up his own food wad, but even that little bit of excitement would overwhelm him, and he’d need to lie down on the couch.” –Steve S

“I didn’t think Margo was necessarily against human happiness, per se. I always just assumed it failed to interest her, unless it affected her plans in some way.” –boojum

“The first Spider-man panel makes sense if you consider the context. Between MJ’s direct-to-video starlet lifestyle and Peter’s utterly gutless inability to stand up to Jameson (coupled with the proportionate photographic talent of a spider), the Parkers can only afford to eat at the worst restaurants in New York. Such eateries often have insufficient flatware sets during peak hours and the pork chops are so dry and underprepared that nothing short of unbreakable adamantium combat claws can cut through them.” –Birthmark Hal

“Your desperation has led you to forget everything you know of either seagulls or Marvin. Death pecking is not a possibility. A relentless diarrhetic war of pitiless, sphincterless attrition is indicated.” –Jp

“I just like that the assassin has remembered to wear blaze orange. Safety first!” –Orange Cactus

“It would seem that the sniper in Mark Trail is using some kind of Giant Word Gun, as it appears Joey Williams is actually being knocked over by the word ‘WHAM!’” –Digger

“Mark Trail: even when a long-hair wants to go straight, he still has to die.” –Ktrout

“It is hard to watch Bill degenerate into senility, hollowly shouting disjointed passages from a comic book, insensible to the fact that his children have left his side long ago. His mental degeneration has progressed so aggressively that he is no longer able to support his family; poor Thel has obviously been forced in her middle age to moonlight as a hotel maid while nursing and patronizing her doddering husband. ‘HOW’S YOUR BOOK?'” –Greenbrastic