Your comment of the week shortly, but first, a few items! You may have heard that several cartoonists, including the odd couple of Stephan Pastis and Jeff Keane, recently travelled to Iraq to visit U.S. troops there. Well, one of said troops, faithful reader MolyBendum, got to chat with the former (if not the latter). If you missed his report in the comments, check it out!

I stumbled across a discarded poster today, and I thought you might be interested in seeing it. It depicts Mark Trail in his usual outdoorsy pose, and Andy, or perhaps a tuft of grass, suggests that you should attend the Corn Tassel Festival in Gainesville. 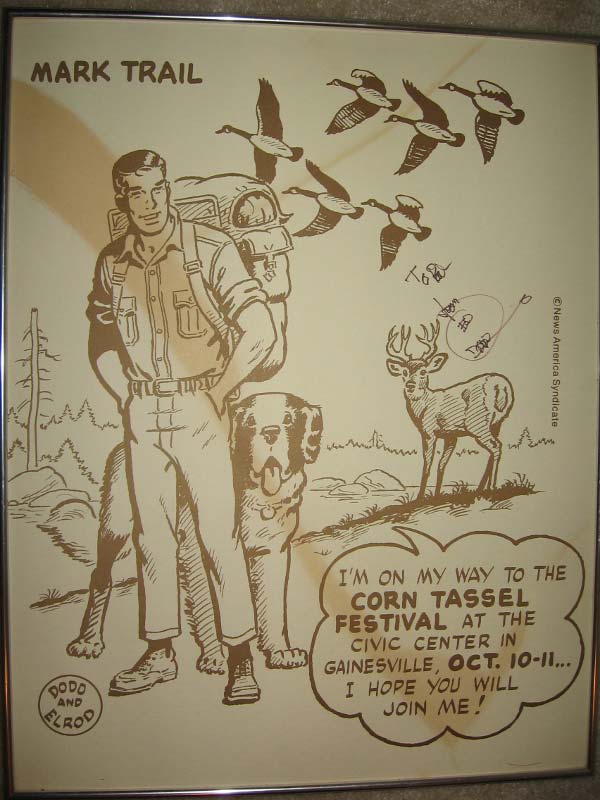 The Gainesville in question is Georgia’s, where a crafts festival has been held annually since 1966. The festival was renamed in 1993 when someone someone bothered to look up the namesake, George “Corn” Tassel, and found out that his greatest claim to fame was being hung for killing a dude in 1830. The case involves some legal sketchiness, since the Cherokee Nation probably had jurisdiction and Georgia hung George while things were being appealed, but still, no one wants that downer at their crafts festival, and it’s now known as the Mule Camp Market. Either way: Mark Trail.

And! Faithful reader Nigerian Business Executive sent me a link to this hilarious collection of comics mashups, which I had somehow missed.

And now it’s that time again … time for … COMMENT OF THE WEEK!

“I imagine the phrase ‘Don’t worry, Tommie. You won’t win’ plays over and over in her head pretty much constantly. Having someone say it out loud is just redundant.” –BigTed

And the runners-up! Also hilarious!

“Slylock wearing a suit, deerstalker cap, and a cape even in the desert? Total prick move. You’re not a superhero. You’re not even a lawman. You have no badge or license. You’re a rat-persecuting maniac, who trails Reeky and Rodney across the world, blaming every crime in a ten-mile radius on them. No wonder they’re reduced to living in tents.” –Strangefate

“I, for one, would like to know why the rabbit man is about to hand Rodney Rat a pair of trousers.” –ArtisticPlatypus

“I noticed today that Leroy Lockhorn’s feet are at least as long as his legs. Given these freakish new proportions (ultra short legs, rotund shape, giant nose, etc.), I can only assume that Leroy is secretly The Penguin. This can only improve the comic, as repeated guest appearances by Batman, increased explosions, and testing the latest umbrella-weapon on Loretta have vast entertainment potential.” –Alan’s Addiction

“After Tommie gets her makeover on I Dressed In the Dark, she’ll be ready to co-star in Margo’s new reality series, I Really Deserve a Punch In the Throat.” –Patrick

“Tommie needs the more intensive makeover offered by I Will Die Alone Then Be Eaten By My Dozens Of Cats.” –Ed Dravecky

“Reveal: I Dressed In the Dark will turn out not to be a makeover show. It’s a hard-hitting documentary about street people, and the producers have been humoring Ruby in the belief that she is queen of the hobos.” –Tim Cavanaugh

“I can’t believe that Cathy did something meta. Now meta has been ruined for everyone.” –Nekrotzar

“I am looking carefully at panel three and admiring the evidence that even campfire smoke obeys Mark’s mighty will. At ordinary campfires, smoke insists on rising and even gets in people’s eyes. This smoke, not wanting to be punched, cowers low.” –Poteet

“The only reality show Ruby and Tommie should audition for is I Dressed Under the Full Glare of Florescent Lighting.” –Victoria Dunn

“When I see someone with outspread arms, an expression of agony, and a glow around his head, I assume I’m looking at a crucifix. Duncan’s other big secret, apparently, is that he is the Son of God, dying for the sins of the world. I am baffled by this plotline.” –sarahtheawesome

“I love the jump to the third panel, where Gil is relating the conversation to Mrs. Thorp. ‘So he’s all, I’m laying bare my emotional distress to you, blah blah, my brother’s in jail and I cry all the time, waaaah. Poor kid, right? It’s all he can think about and absolutely no one gives a shit. Especially not me.'” –Mollie

“Ruby says Tommie’s clothes are ‘just’ boring. Just? Ruby, honey, Tommie’s got boring down to an art. She took a vow of extreme boring many years ago and has been a faithful practitioner ever since. She’s a professional bore-meister. If Tommie suddenly stripped naked and started humping the sofa arm, the only notice anyone would take is to straighten the doily.” –Farley’s Revenge

“I’m not entirely convinced that Duncan’s brother is actually incarcerated. To me, it looks more like Duncan is just experimenting with a new, hip alternative to the classic ‘In my pants’ joke, leading to some wacky misunderstandings when people take him seriously — IN PRISON!” –yuudai

“Why do I find Bernice sexy? Because she is unattainable? I better discuss this with my therapist later.” –LITTLE A. OF THE GRAND CONCOURSE JUNGLE PATROL

“I like Gil’s dim awareness of Duncan’s family situation. ‘Davey, right? I have vague memories of fucking up another Daley’s life six or seven years ago. It’s all a blur. Every year, they come to me poised at the brink of manhood, loaded with testosterone, and highly vulnerable to bad decisions. I should try and help steer them, but I’ve got the playdowns to worry about. Speaking of which, Dunc, how’d you like to kill Marty Moon for me?'” –Edgy DC

“Why is Ziggy even in the hospital in the first place? He looks fine. And by ‘fine,’ I mean more or less how I would assume a squat, bald dwarf with no pants on should look.” –Indichik

“What the heck kind of a prison is that? Karate prison?” –the good ship thetis

“Mud? In Dennis the Menace? Oh, I wish that were mud, but we both know that’s not true.” –Victor Von

“I like the fact that in deference to the elderly (the last demographic on Earth who read Rex Morgan non-ironically) the narration box refers to the escapees as an ‘older’ couple, rather than using a more straightforward terms such as ‘old,’ ‘cogerish,’ or ‘overly entitled Alzheimer-crazed gatecrashers.'” –Jake Morgendorffer

“Just so everyone’s clear, Mark refers to his left and right fist as ‘The Rangers.'” –Digger

“I was so taken with the new FW mission statement in panel three that it took me all day to realize that I don’t really give shit what happens to Cory.” –C. Havoc