Your COTW momentarily, but first, an absolutely delightful bit of Worthiana from faithful reader John Small Berries! He writes:

While cleaning out my office, I ran across the attached panel of Ian Cameron trying to relax at home. I’m not sure when it was originally published, but it’s at least several years old (my wife snagged a photocopy from the clipping on her mother’s refrigerator back in the first half of the last decade; no idea how long it had been hanging there). I thought you, and perhaps the rest of the Comics Curmudgeon readers, might be at least mildly amused by this bygone glimpse of life in Casa Chinbeard. 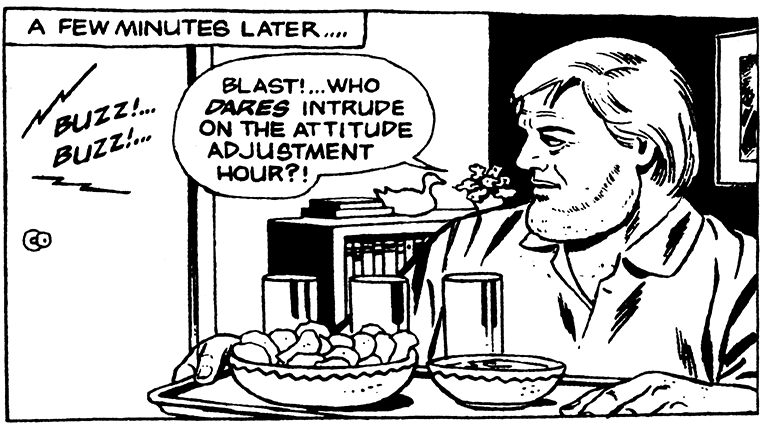 One of the interesting things about the soap opera strips is that there are literally thousands of them out there, but they’re almost entirely uncollected and thus inaccessible to any but the most patient soul willing to whirl through the microfilm at their local library. Who knows what awesome Aldo-level storylines delighted Mary Worth readers in the ’70s or ’80s, only to vanish in the mists of time? All we have is are brief, contextless glimpses like this. We can tell, for instance, that sometime in the 1990s or thereabouts Professor Cameron liked to “adjust” his “attitude” by sitting in front of the TV with a bowl of potato chips, a sizable amount of ranch dressing, and three tall glasses of scotch, and that in the middle of one such episode, he was interrupted by a rude buzzing, possibly a result of someone pressing a marital aid against his condo unit’s door. Beyond that, we know nothing.

And your runners up! Very AMUSING.

“I was just down at the medical center, and I picked up this donated organ no-one wanted! Now let me pour out some clear serum for a refreshing drink!” –nomuse

“A trip through Devil’s Pass sounded interesting, so naturally it wasn’t. MT has a strange gift that seems to require a new word. I choose ‘borifying.'” –Poteet

“When he talks to his wife, Mark Trail has a vacant expression of joy that is the hallmark of a man whose marriage is built on a foundation of pharmaceuticals and denial.” –NoahSnark

“Thank goodness for Apartment 3-G, where Mr. Margo’s Dad remains under the adorable delusion that his daughter can love.” –Black Drazon

“They use to tell me I was so green … that my head looked like even more like an avocado.” –Red Greenback

“I love how that conversation ends. Cherry saying ‘I love you’ and that’s it. Mark had probably already hung up. Or better, he slammed the phone down as soon as he heard Cherry’s tongue curl.” –Roto13

“It does look like even the pigeons are just sort of ‘Yeah, whatever, buddy, just keep the birdseed coming.'” –Baron Bizarre

“‘Kurt agreed to the paternity test? Will he confess that he knew the results all along?’ I can just imagine how that conversation will go. Wilbur: ‘Well, it cost us $2,000, but now we know that I’m not your father.’ Kurt: ‘Yes. I knew all along. I’ve been intentionally manipulating you.’ Wilbur: ‘This won’t change our relationship at all.'” –AndyL

“Peter should just go to a costume store if he needs his silly pajamas to fight crime and rent one. Then he can spend three weeks’ worth of panels worrying about WHAT IF the clerk SUSPECTS that he might be THE REAL SPIDER-MAN and isn’t that a suspicious request for a CREDIT CARD that has his REAL-LIFE NAME AS PETER PARKER on it, that somebody might use to trace his SECRET IDENTITY? Meanwhile the actual clerk finds Peter to be a dull, slightly fidgety guy who’ll get the speediest possible service because he’s acting kind of creepy so let’s take his money and get him out of here.” –Chip Whittle

“How bad is Dawn’s tea? Apparently Mary has to use both hands just to force it down her own throat.” –Digger

“Good Lord. It’s like they wrote ‘3 P.M.: Frolic’ in their day planners.” –commodorejohn

“I’m a little insulted by the snarky ridicule directed towards Wilbur and Kurt, to be honest. Sounds like someone didn’t get enough con-artist/fake-father bonding time growing up” –Krazy Kat

“There is nothing more alluring to high school girls than helping the school janitor clean up the gym after a game. Maybe he will let you sniff the used towels.” –Rusty

“Dithers’ heel isn’t on Dagwood’s throat; it’s on his bowtie, the source of his power.” –Jonn

“Yes, Beetle, it is always a mistake to embark on a journey into the strange, crisp world of uniform cosplay.” –skullcrusherjones

“But check out that look on Mr. Kessler’s face; he’s staring directly at the comic strip audience with a knowing look in his eyes, as if to say ‘You and I, my friends, we know better, don’t we? We know that just last night I was entertaining a couple of nubile young coeds and then things got a little, shall we say, Freak-Ay! You can find more details at http://www.kinkymisterkessler.com. All major credit cards accepted.'” –Jeff Soesbe (yeff)

“Kurt’s gone! And he made his bed first! THE BASTARD!!!” –BowToTheBard

“Mr. Wilbur Weston really ought to be arrested for felonious lack of self-respect. Is there any doubt what caused young Mr. Evans to slink away in the middle of the night? One is not surprised that he would prefer the precarious life of a ne’er-do-well to having such a sad case as a role model. He certainly could see the impact on his putative half-sister. Miss Weston has no friends, no life, and apparently no ambition beyond being elected princess at the Santa Royale eggplant festival.” –Fashion Police

“Ah … Major Kessler of the SS. The Mossad lost you in Argentina. Milford … in a clown suit … pure evil genius! Check and mate, sir!” –Sans Sense

“I get a strong impression that the MW artist really enjoyed drafting class and would be much happier if he were allowed to draw Wilbur, Dawn, and the rest of the crew as nice, pleasing, regular cuboids in a cabinet oblique projection. Cross-hatching could be employed as an indicator of strong emotion, when required. The white shorts today are a clear sign of a bitter, frustrated man lashing out the only way he knows how.” –One-eyed Wolfdog