Your COTW momentarily, but first, some items of note! Last week I noted that one might need to (horrors) leave the house and go to the local library to find old soap opera strips, but faithful reader AndyL has another suggestion: the omnipotent Google! Yes, our cybernetic overlord has scanned back images of newspapers, allowing you to see things like Judge Parker from 1963, Apartment 3-G from 1967 (did someone just get acid thrown in their face?), or Mary Worth in 1962. (You may have to scroll around a bit in order to get to those strips.) 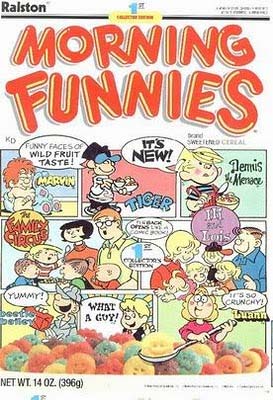 What A Guy is apparently a comic from Reiner and Hoest, the same people who brought you the Lockhorns. I have no idea what it was about, but I hope it was about some little kid who just always goes around kissing everyone’s ass, proclaiming “What a guy!” about anyone at the drop of hat. As an aded bonus, fillmoreeast points us to another Google-indexed historical moment, this one from 1988, in which a Lakeland Ledger reader from Tampa writes in to complain that her beloved “cute” What A Guy has been replaced by some newfangled thing called Calvin and Hobbes, which she calls “OK but very uninteresting.”

And on that note, here is your totally interesting comment of the week!

“Petey’s pretty flagrant with his web-slinging there, but good job to him for not blurting out, ‘IT WAS SPIDER-MAN AKA PETER PARKER.'” –He Brought Queenie Baby Jesus

And your runners up! Also funny!

“Mark Trail: “Ummm … people who punch out a Senator get arrested pretty damned instantly. You ‘expressed concern’ to the wildlife office? I can hear Leonard Nimoy in panel three saying ‘Most illogical.'” –ignatz

“It doesn’t seem to have occurred to Peter that none of these costumes comes with a mask. Which is why ‘Mary Jane Watson’s husband climbs a building in a wizard suit’ is bound to be number 1 on YouTube tomorrow.” –BigTed

“How is that broom hanging from the rack? Is the hook part of the prop? Now all Peter needs is a fake mustache and a spinning bow-tie, and he’s all set to unleash some vaudeville justice.” –bman

“I’m less concerned about Mark talking to Mr. Spock than I am that Boss Hogg is apparently a U.S. Senator now.” –BRWombat

“Is it possible that Batuik is going to impose his own version of Chekov’s Law of Economy in Narrative? ‘If you find a gun in the first panel, it must be completely forgotten by the third, to make way for more suffering and disease’?” –Calvin’s Cardboard Box

“I didn’t know that they sold Lockhorn dolls?! It even comes in a ‘What has two thumbs and hasn’t had sex in forty years?’ pose.” –LUJBEM FEJF

“Panel 1 from A3G is golden. Look at her face! Poor Tommie, moping through life in the shadow of one roommate and the all-encompassing eclipse of the other, has just had her last and final hope of at least a normal life — that age comes hand in hand with wisdom — crushed by the wisest and most honest person she knows. It’s powerful, tragic and, at the very centre of the issues at hand, takes place during someone else’s storyline. Now let’s watch as the story writes itself from here as Tommie’s crushing depression begins to suffocate her, but only in the throwaway Sunday panels most papers don’t even run.” –Black Drazon

“It’s good to see Mark consulting the Romulans on political matters. They served him well in providing a wife.” –migellito

“I think if you were to tell Tommie that ‘life isn’t fair,’ she would be genuinely surprised to hear it. ‘Golly, I always thought it was! Hmmm. Now that you mention it, that makes a lot of sense. Explains a lot, really, like my string of failed relationships or the fact that I share an apartment with the modern-day Lucrezia Borgia.'” –Joe Blevins

“Dawn can’t wait to see the crushing disappointment on Wilbur’s face; it’s like Christmas, only with tears!” –True Fable

“Re: Wilbur (advice columnist) and Toots (slacker/drifter), methinks I detect the mayo-smeared fingerprints of the vast international Sandwich Lobby in the comics. Is nothing sacred? (Other than, perhaps, Baconnaise.)” –mvg

“A rare early Family Circus panel depicts the prequel to Whatever Happened to Baby Jane? with a hydrocephalic Dolly in the title role. Note the audience of matronly drag queens she has invited into the living room, to the horror of her mother.” –Doug Starr Twinkle

“Ok, if faced with the fill-in-the-blank ‘you’re a ___ couple if you can wear each other’s jeans,’ I’d have said gay. Why is Pluggers insulting my people like that? (Obviously I meant that as a gay, not as a monstrous suburban furry.)” –edp

“It’s heavy … but I like it. I could probably crush an esophagus pretty easily with this. Now cough up some real money, you hippie.” –Taquelli

“Toots’ plan to remain hidden will fail because 1) Sarah has no way to conceal the skateboard, 2) June will detect his life signs with her tricorder, and 3) Abby just took the only food he’s had in days. He’ll be found out by nightfall (aka ‘late May 2010’).” –Ed Dravecky

“Strangely enough, Peter Parker has hit upon the perfect costume for a Miami super-hero: ‘Raving at an all-night beach circuit party in an angel costume, mild-mannered Rafi Aguilar was transformed into the Amazing Guardian Angel when he took ecstasy laced with radioactive ketamine!!” –teddytoad

“Be careful with your addictions, Wilbur. Sandwiches are comforting, but they’re a just a ‘gateway’ food. Soon, you’ll begin experimenting with wraps, then pita pockets and gyros. I only pray you’ll seek help before you find yourself drawn helplessly into the dark underworld of paninis.” –Perky Bird