When I was a kid, some Buffalo Bills star or other had been suspended for failing a drug test, and I remember having a conversation with my father (who was then the director of an alcoholism clinic) about why someone would endanger their very lucrative career for an occasional high. He explained, in a formulation that has always stuck with me, the addict’s trajectory: first using drugs makes you feel good, then you need drugs to feel good, then you need drugs to not feel bad.

This statement really jumped into my mind today when watching the suddenly diminished Clan Weston hash out the aftermath of Kurt’s duplicity over yet another sandwich-based meal. These white-bread-and-baloney-and-mayonnaise sandwiches ought to be a comfort to Wilbur and Dawn in these trying days; but Wilbur is just shoving his in the general direction of his mouth without even giving it a glance, let alone pausing to savor the subtle interplay of flavors. He’s like a junkie in some abandoned rowhouse, shooting up because of his raw need and long ago forgetting the transcendent high that got him hooked in the first place, and his sandwich requirements have just become a semi-conscious undercurrent in his life now. He probably doesn’t even realize that he’s got a second sandwich all queued up on this dinner plate ready to go once the current one has been devoured. Did he even bother to put condiments on that one?

The really sad part of this scene is Dawn, who’s only of college age, and yet seems equally blasé about sandwich use. She appears to be using her sandwich as a prop for gesticulation, just waving it around for a bit until she’s ready to cram it down her gullet with as little chewing as possible. She learned it from watching you, Dad. She learned it from watching you. 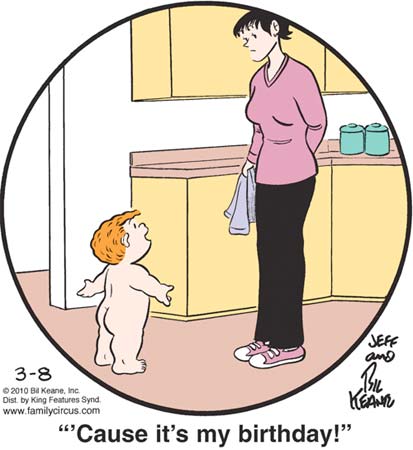 Many victims of repeated trauma eventually form a sort of bond with their oppressors; in hostage situations, this is called Stockholm Syndrome. Thus, after repeated exposure to Jeffy’s naked ass, I seem to have become inured to disgust and indeed experienced brief amusement at today’s Family Circus panel. Most experts agree that a swift and merciful death would be for the best.