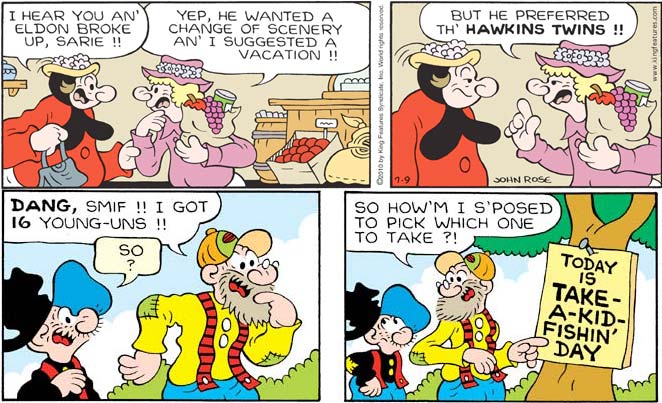 I have to admit to having been scandalized by Friday’s Snuffy Smith, in which a local young woman casually admits that her paramour has left her to enter into a polygamous relationship with sisters. What could be the cause of this attack on traditional values in Hootin’ Holler? Could the male population have been so reduced in number by moonshine still explosions that the women have to share them? The throwaway panels, in which another local admits to fathering more than a dozen children with who knows how many women, points in the same direction. It’s also possible that some multinational chemical conglomerate is using whatever fetid lake serves as Hootin’ Holler’s water supply as a illicit disposal site, with the noxious substances causing a freakish increase in the libido of the male inhabitants.

Was this all that Tommie ever wanted — shared humiliation? She knows that her own world of sadness will never end, but now that Lu Ann and especially Margo have been dragged down with her, she allows a brief smile to cross her face.

Hey, everybody, do you know what today is? It’s the sixth anniversary of the beginning of this blog, which in Internet years is several lifetimes! Look back in wonder at my first-ever post, in which I talk about Non Sequitur (something I would almost never did again) and break my own (later-instituted) Don’t Talk About Mallard Fillmore Rule right in the title. I think I have come a long way in my writing skills and comics appreciation in the 2,400+ posts that have followed, and both my skills and my appreciation have been honed by the 369,000+ comments that readers have added to the site. Thanks to all of you, whether you’ve been reading for six years or six days — it’s only knowing that so many of you enjoy the site that keeps me doing it. And don’t worry, I plan to carry on until the Internet is replaced by something even more irritating and time-sucking.