At last, someone is showing some initiative around here! Naturally it’s Margo, but the low level of rebellion on display is really pretty pathetic. Oh no, they’re going to leave their hotel room and order dinner! Really, Margo, we expected Kat and Kitty’s severed heads to be displayed on pikes as a warning to others by this point. Why exactly is reckless restaurant-going forbidden, anyway? Is the show broadcast live, in real time? Are they depriving Americans of their chance to watch three badly dressed women mope around in a hotel room? Surely the entertainment value there ended when Lu Ann and Margo drained the minibar.

Meanwhile, the transformation of Jules from “predatory European sexual threat to Sam’s American sense of morality” to “sad, abused doormat” is pretty much complete. The best part of this scene is the way he’s proffering up that shoe, like it’s some kind of excuse. “But, your father and I … we’ve been working … look at this shoe! It has a decorative buckle-thing! And it’s been weight-tested! Please love me!” 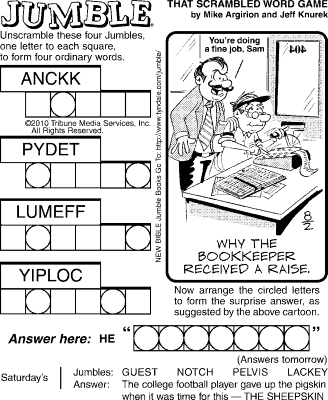 As always, I cheerfully admit that I don’t have the brainpower to actually solve the Jumble, so I have to make my guess on what’s going on from the visual. Obviously curly mustaches and furrowed brows are only found on evil characters in comics, so I’m guessing the boss is going to give Sam a raise for cooking the books and hiding millions of dollars in offshore shell corporations. You just wear that visor and sheepish expression on the witness stand, kid, and we’ll do great, trust me.

Once again, I’ve become briefly intrigued by the new Popeye storyline, though I’ll quickly lose interest once it devolves into the boring kind of insanity. At the moment, though, I’m intrigued by what Popeye and the Professor have cooked up. Looks like genocide! Scientific genocide.