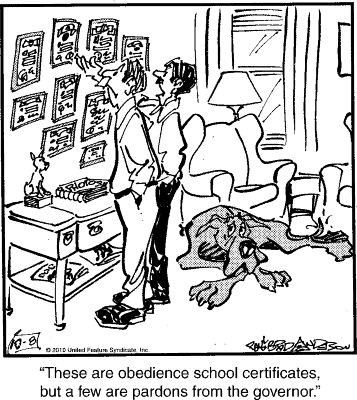 Local authorities and various torch-wielding vigilante mobs have, when faced with the horror that is Marmaduke, often demanded that KILL IT OH MY GOD KILL IT’S A MONSTER KILL IT IN THE NAME OF ALL THAT IS HOLY. But the governor’s team of top scientific advisors have determined that attempting to “kill” Marmaduke will only cut his tenuous connection to a mortal, physical form, transforming him into a malevolent, destructive force of pure energy that can not be stopped or contained. Thus the executive orders to maintain the admittedly terrifying status quo.

Oh my God, Dick Tracy has stumbled onto a cadre of Communist hobos! This makes the hobo-eradication program he conducts in his off hours totally justified, retroactively!

“What I’m trying to say is, if you manage to suppress your wholly baffling attraction to him, you won’t be turning your back on the troops and God and America and freedom. He’s just a drunk with really bad luck! Wanna see my stump? The stump that WALLY MADE?”