Now, I’m just a simple country blogger, not a fancy math wizard, but if I’m counting right, Nan is around 12ish years older than Zak, whereas Iris, who has noted that Zak is Tommy’s age, is closer to 20 years her beau’s senior. We may be on the verge of a spectacle in which a woman feels threatened by the youth and vitality of her fiance’s former babysitter, which is a truly amazing sentece to write about an ostensibly dull comic strip like Mary Worth. And where is Tommy’s actual mother in all this Oedipal jockeying? I assume she was absent, both physically and emotionally, during his childhood, so if she bothers to show up for the wedding, things could get even more weird and fraught, which is how I like my newspaper soap opera comic strips. 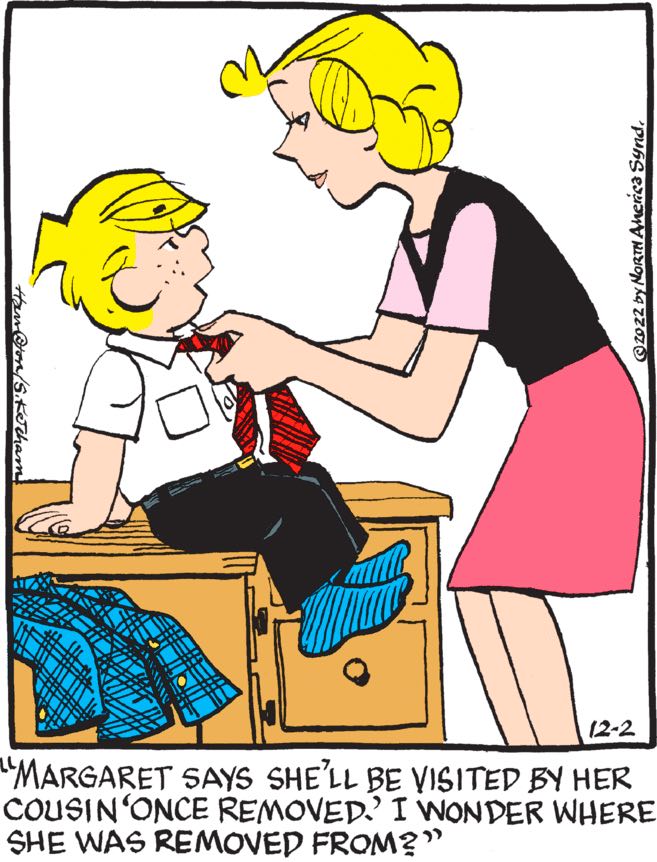 I kind of enjoy the fact that we’re getting this limp gag as Alice gets Dennis dressed up in an adorable little suit and tie, even though their conversation is about a different topic entirely. Like, we know they’re heading for a fancy dinner with Henry’s coworkers where Dennis is going to blurt out something to the effect of “My dad says you’re a drunk,” but until then we’re going to kill time with a little Family Circus style darndest things saying, just as a warmup.

Wow, it turns out that the book Summer is going to write will lead to a future where our allegiances to individual nation-states are replaced by a worldwide algorithm-driven form of governance. Sounds dystopian, sure, but probably all memory of Lisa’s Story has been purged from humanity’s collective consciousness, because Summer’s book is the Only Book that the drones of the 22nd century will need, so maybe we shouldn’t be too hasty in judging this new age.

If I know my commentors, if I did a post that was just like “what the fuck is this comic about,” a critical mass of you would say “Josh, the ‘pope’s nose’ is the fleshy bit on the butt of a turkey that the tail-feathers grow out of [Google Image Search; TRIGGER WARNING: photos of fleshy turkey bits], everyone normal knows this and the fact that you don’t proves you’re a coast elitist and/or an idiot.” Nevertheless I feel confident that there is a silent majority of you who will welcome this information, and in fact many of you are grateful for the reassurance that you did not have a stroke while reading this strip.

I guess we all assumed that Walt would finally, blessedly die as a result of falling off the back of a garbage truck, but I guess in fact he’s going to be murdered by an enormous and very angry turkey who he has unwisely provoked. Whatever works, I say!

Oh, OK, it turns out the janitor was sent back in time from the future, presumably to prevent some awful turn of events and keep history on the right path. Considering how much suffering the characters in his orbit have endured, imagine what sort of global cataclysm his actions are holding at bay! Anyway, this is a good explanation of why the Funkyverse timeline has gotten so messed up.

So it turns out that turkeys have their own internal system of carceral justice, complete with state-enacted executions, but then all of them can also be killed and eaten by humans at any time, and that’s totally separate from their legal system or moral code. Grim stuff! Enjoy your Thanksgiving dinner, everybody!

Oh my God, Mr. Davidson the janitor is some kind of near-immortal being, charged with subtly guiding the world under his care, just like the characters in the MCU movie Eternals (maybe? like all normal people, I did not see that movie or read the comics it was based on). Anyway, it turns out that despite his apparent old age, in the context of his own kind he’s just a beginner, which explains why the Funkyverse is so deeply fucked up.

I guess the glory days of Dick Tracy really are behind us: instead of having his skull exploded by powerful magnets, Steelface just got mildly burned and then left the hospital in a huff over the substandard medical care they provided, and instead of being shot in the back for “resisting arrest” by Dick and his goons, he’s just going to learn through irony that stealing cars isn’t very nice, and so he’ll wind his stolen car ring up post-haste and move on to more socially productive pursuits.

Oh wow, look at how mad Truck is! He’s beginning to suspect that Mud Mountain’s whole binge eating/onstage pants-shitting bit was just a ruse that successfully promoted him from opening act to headliner! This is why you never found stardom, Truck: you have to be willing to endure any humiliation, public or private, if it advances your career. You never had what it takes and you never will. 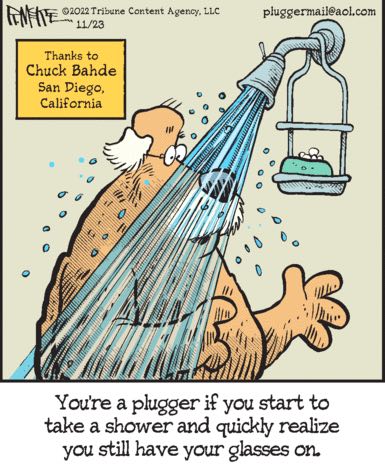 A fun fact is that on more than one occasion I’ve started to take a shower and realized I still had my hearing aids on, which is a much more terrifying situation vis-a-vis replacement costs than the one in which this plugger finds himself. But it turns out they’re pretty hardy gadgets and they came through OK! Anyway, I have out-pluggered a Pluggers and now I need to go take a long shower (without my glasses or hearing aids on) to cry.