I generally think of piles of leaves as pretty ephemeral things, but apparently the one next to the Daddy Daze Daddy’s house has been there mouldering and rotting long enough that he expects his ex, who does not (and perhaps never did?) live there, to know about it, which may say a lot about why they broke up.

THE COMIC STRIP FUNKY WINKERBEAN [imparting profound, soul-burdening wisdom]: Someday — perhaps someday soon — you will grow old and die, and as part of that process, you will inevitably piss yourself, so you’d better buy some diapers now to prepare.

“I’ve decide to go by a norman human name and stop dressing in impractical knight’s garb so I cHAHA JUST KIDDING I’M A DICK TRACY CHARACTER, THIS IS OUR ENTIRE DEAL”

Slylock Fox’s Which Two Scenes Are Exactly Alike? Presents: FRANKENBART: The Frankenstein Made Out Of Bart Simpsons’ Corpse

I’ve apparently lived my life either correctly enough or incorrectly enough that I’ve never worked anywhere that’s been subject to a police raid, but if I ever am, I dearly hope that I have the presence of mind to react with a hilarious pratfall and Jerry Lewis-esque sound effect. Anyway, I hope Dick’s cartoonist friend is proud that his Bugs and Worms comic-themed video game is “doing great” among criminals. 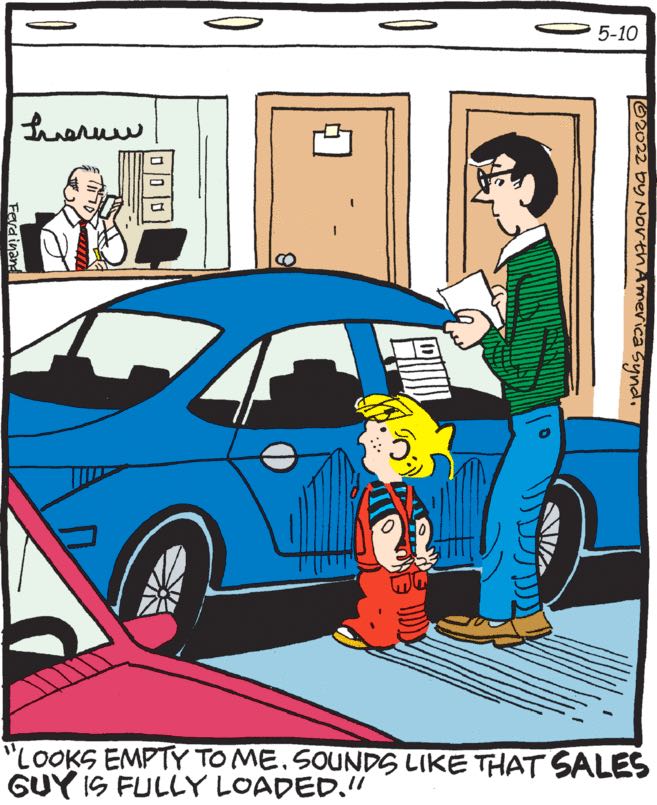 Does Dennis think … the car salesman is drunk? Is that what he’s saying? Whatever it is you’re getting at, it’s only menacing if you say it in front of him, Dennis, this is just confusing.

“Wait, what if a thing that’s happening … continues to happen?” Toby asks, suddenly aghast. Boy, you finally get your brain around object permanence and it really raises a whole host of unnerving questions, doesn’t it?

Man, I really respect the second panel here for unleashing the full-throttle refusal to give a shit that makes Beetle Bailey the strip we all know and read every day for some reason. Just a bunch of people, some of whom we know and some we don’t, standing around a … void? with no furniture? because that’s what a “rec room” is, in the army? I guess???? Anyway, the fact that everyone’s facial expressions range from mild excitement to vague annoyance is just icing on the cake. Bravo, it doesn’t get more Beetle Bailey vibes than this.

“Ignorant,” Curtis? Derrick and Onion clearly paid attention in class when you were supposed to be learning about Greek mythology, which is more than you can say.

“Yes, your honor, we have Stuntman Mike’s evidence on this. No, I don’t know his last name. I don’t know if he’s actually a stuntman, either. I only talk to him on the computer and his face is always blurred out. Look, are you going to give me a no-knock warrant to raid this day care center or am I going to have to start leaking to the press that you’re a soft-on-crime lib the next time you’re up for re-election?”